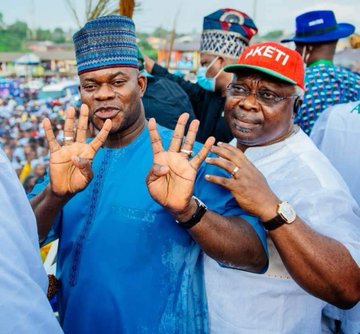 Bello made the statement when he featured on Sunrise Daily, a Channels Television programme, on Tuesday.

Bello said the protest was sponsored by politicians who are benefitting from the disruptions caused by the demonstrations across the country.

“Let me tell you, what is happening today; so-called #EndSARS is politically motivated. Whether anybody says it or not; I am saying it again and quote me anywhere, any day,”

“Why would you demand for five items, 5for5 and granted, and refuse to take it? Which struggle, which agitation, which uprising across the world has ever succeeded without leadership?”

He added that though he supported the agitations of the youth, they should have stuck to their initial demands and taken what the government gave them.

“Hundred percent, I agreed but if you look at what it is happening today you will have no option as to classify it as politically motivated. Let me tell you, this is a ploy to set us against one another,” he said.

“A lot is wrong with that. You see, let me tell you, you asked for #EndSARS, and remember not everybody believes in ending SARS. And if you say the SARS is wrong or have been doing one thing wrong or the other, the best way to have agitated was to ask for the reform of the total security overall, the security architecture.

“When you begin to shift goalpost and your list is endless you don’t need a soothsayer to tell you that this is political. It is unfortunate lives were lost which should not happen. We should have taken the 5for5 that was given and moved on. At that point, we should have taken the goods and the gains and get off the street to have avoided the looting”.