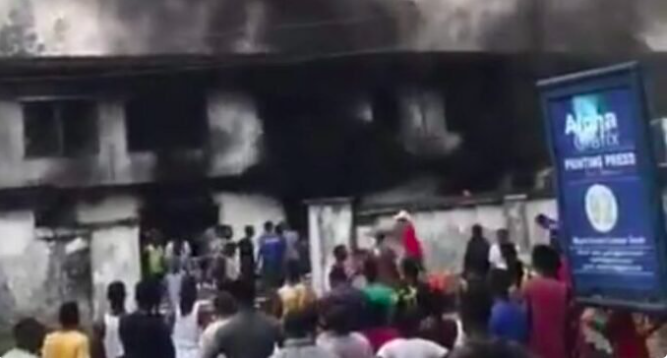 The family house of Gershom Bassey, senator representing Calabar-south, was on Saturday invaded by thugs.

The hoodlums looted items from the building located in Calabar, the state capital, after which they set the house ablaze.

Videos of the incident circulating online show some men making away with mattresses, television sets, a chair and gas cylinder from the building.

The attackers were said to have overpowered the security men attached to the residence before gaining entrance into the building.

Houses of prominent politicians from Ndoma Egba, to Liyel Imoke all attacked in calabar despite the 24-hour curfew declared on Friday by Ben Ayade, the state governor.

Ndoma Egba defected from the PDP and joined the All Peoples Congress (APC) in November 2015.

He was Deputy Leader of the 6th Senate (2007-2011) and Leader of the Senate (2011-2015). He returned to his law practice as Senior Partner in the Law Firm of Ndoma-Egba, Ebri & Co in Abuja. In July 2016, he was appointed Chairman of the Niger Delta Development Commission (NDDC) by President Muhammadu Buhari.