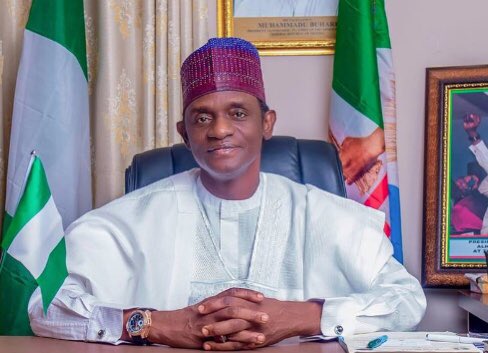 The acting chairman of the ruling All Progressives Congress (APC), Mai Mala Buni, has said the current protests against police brutality rocking parts of the nation may lead to anarchy if not well handled.

The Yobe State governor also said there is a hidden agenda behind the ongoing protests which have claimed lives.

The official told the BBC Hausa Service Monday morning that there is need for Nigerian leaders to intervene and persuade the protesters to leave the streets to prevent anarchy.

The protests started with a demand for the disbandment of the Special Anti-robbery Squad (SARS) of the Nigeria police over the brutality and criminality of its operatives.

However, after the government conceded and disbanded the unit, initiating reforms, the protesters have remained on the streets and expanded their demands.

“Hoodlums can utilise the gathering to cause confusion and terrorise other innocents citizens,” Mr Buni said. “The ongoing protests show that there is hidden agenda, after the government has responded to the protesters’ demand.”

“Nigeria is a country accommodating people with several motives and demands which include restructuring and disintegration, thus, we should be careful,” Mr Buni said.

He said “there are criminals who see the disbanded police unit as threat to their criminal activities”.

#EndSARS: You have made your point, please call off the protest; Tinubu begs