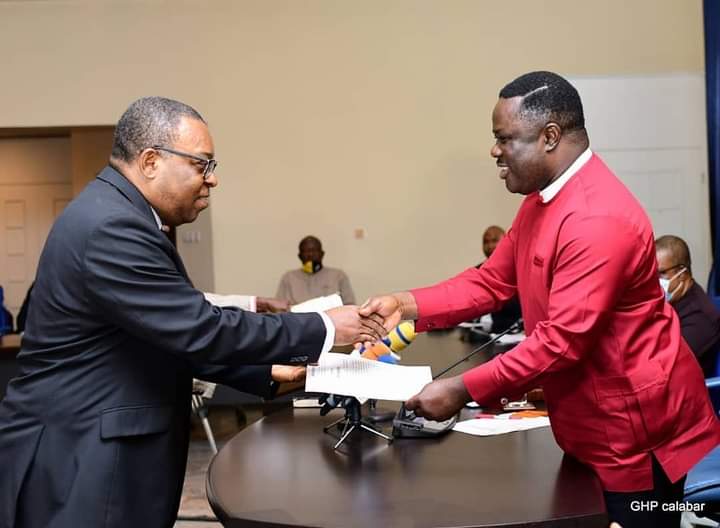 The protest held just as the Cross River State Governor, Ben Ayade was swearing in Justice Eyo Effiom Ita as acting Chief Judge of the state, following the exit of the former acting chief judge, Justice Maurice Eneji, who was himself appointed in controversial circumstances following the refusal of the Cross River State House of Assembly to confirm the nomination of Justice Akon Ikpeme, describing her as a “security threat” over her ties to Akwa Ibom State.

In a statement made available to our correspondent, the group accused the Governor of being insensitive to the plights of Cross Riverians and that he had taken the decision to appoint Justice Effion Ita just to douse tension, but that the right thing must be done.

“We are neither moved nor deceived by this Greek gift. We are not persuaded by it. It is another ploy to run away from doing the right thing and put the judiciary and indeed the in another situation of uncertainty.

“We are not deterred and remain unshaken in our resolve that the right thing is done. Cross River State deserves a substantive Chief Judge and that is the only practical solution to this quagmire,” he stated.

the group insisted that the government follows the recommendation of the Nation Judicial Council (NJC) and swear in Justice Akon Ikpeme who is the most senior member of the bench in the state.

In the statement jointly signed by Barr. Enome Amatey and Barr. Effiom Ayi, the lawyers berated the State Government for allowing a vacuum in the head of the judiciary for 46 days and for not appointing a permanent chief judge in the last 11 months.

The lawyers marched from the State High court Complex, Mary Slessor to the Governor’s office, and booed the Deputy Governor, Prof. Ivara Esu when he came to address them.

The Cross River State House of Assembly Speaker, Hon. Eteng Williams has congratulated Justice Eyo Effiom Ita on his appointment as the new Acting Chief Judge of the state.

In a congratulatory message signed by his Chief Press Secretary, Mr. Hope Obeten, Williams described the appointment of the Justice Effiom Ita as a big relief following the vacuum created in the state judiciary since the exit of Maurice Eneji on September 3rd.

“The news of Justice Eyo Effiom Ita’s appointment by the National Judicial Council (NJC) came to us as a big relief as we are aware of the vacuum that was existing in the state judiciary following the delay in communication by the NJC.

“Hon. Justice Ita is known for his forthrightness and commitment to upholding the rule of law. We are therefore convinced that he will bring to bear his wisdom and professionalism to the dispensation of justice in our state.

“On behalf of the Cross River State House Assembly, we wish him a great success in his new office, he can be assured of our unalloyed support and encouragement to ensure that Cross River judiciary is taken to greater heights,” The Speaker said in a statement issued on Monday in Calabar.

Kolade Johnson’s killer, 20 other police officers to be tried for human rights abuses in Lagos