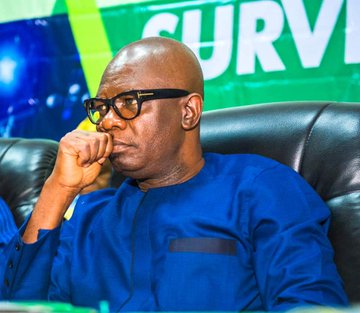 Ondo State Deputy Governor and Zenith Labour Party governorship candidate, Agboola Ajayi, said on Thursday that voters in the state had made their mind to effect change through Saturday’s election.

Ajayi, who said the people were fed up with the torture they had experienced in the last three and half years through bad governance, said that no amount of financial inducement would deter the people from voting out the ruling All Progressives Congress on Saturday.

The ZLP candidate, who spoke in a radio interview monitored in Akure, the Ondo State capital, said, “There is no doubt, I will win the election considering the people’s love for me and acceptance of the people’s oriented programmes that I have outlined.

“My government will be for the people and by the people.”

Ajayi, who said his opponents would fail despite their poly to buy votes, said, “We can’t continue to mortgage our future because of peanuts. I know Ondo State people are very intelligent and they will not do that on Saturday. Our people have made up their minds. People are only waiting for the d-day to come and vote. It is obvious people are tired of the APC government”.

The ZLP candidate said, “When elected, my administration will reduce the tuition fees payable in Adekunle Ajasin University, Akungba Akoko to N50,000 and introduce social security project for the aged across the 18 local government areas of the state.

“I know I am the most qualified and I know and believe the people of Ondo State will vote for me on Saturday. We are going to make education free in primary and secondary levels and AAUA fees will be reduced to N50,000. Also, in health, I will start from where Dr Olusegun Mimiko stopped.

“We will cater for our old people through establishment of l ‘Irorun Arugbo’ programme for our aged across the local government areas to see to their welfare needs. We will establish a center for them where they will be able to know themselves and interact well,” he said.