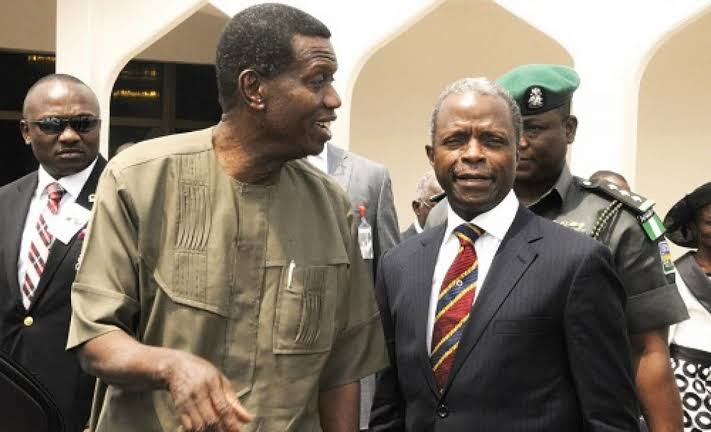 Really, Nigerians pined to hear Osinbajo, a professor of law and senior advocate of Nigeria, talk up when the Buhari administration dispatched DSS agents to desecrate the residences of judges in the most ungodly hour. Nigerians strained their ears in vanished hope that even a whisper of condemnation against the assault on journalists and activists by the government will be let out by the vice-president. Even if not spoken, there are unspoken gestures the vice-president could have used to convey his position on the extra-judicial exertions of the administration if he really differed.

Yes, Nigerians longed to hear Osinbajo speak up for those massacred in Southern Kaduna; those kidnapped and killed by bandits. The vice-president held so much promise even in a very unpromising government. There was wild jubilation when he was acting president – at the time President Muhammadu Buhari was on a medical sojourn in London. But he failed to level up to the expectations. He simply refused to call a spade a spade when the graves of innocents were being dug.

However, Osinbajo appears to be speaking up, or spouting off now – whichever way you want to look at it. His belated activism though approving, flagellates cynicism. He veered off the old, dribbling path when he said in September poverty was deepening daily in the country – against the government’s duplicitous stance that it is cutting hunger by the torso through its social investment schemes.

In his words: ‘’… every single day the poverty situation and the economic distortions deepen….”

Also, just a few days ago, Boss Mustapha, secretary to the government of the federation (SGF), said at an event where he represented Osinbajo that there were ‘’cracks in the walls’’ and that Nigeria risked a breakup. Even though Osinbajo did not make the statement himself, his bearing on the current state of the country speaks well enough.

In addition, the vice-president recently spoke in favour of merit over federal character in appointment into government offices. For me, this is a real dig at the spleen of an administration that has chalked up notoriety for sectional, zero calibre and incompetent appointments.

He said: “I need to make this point because time and time again, we get arguments around whether the appointment of persons into public institutions should be based on federal character. The dominant principle should be merit.’’

Therefore, it is not nonplussing that the quick-witted intervention of Pastor Enoch Adeboye, the general overseer of the Redeemed Christian Church of God (RCCG), on the restructuring debate rankled a certain camp at the presidency. Adeboye is the spiritual father and mentor of Osinbajo. You can tell that they both soup in the same ideological bowl.

Without any scintilla of doubt, Adeboye’s deposition that if Nigeria is not restructured it will break up is beyond reproach.

Really, it is disturbing that a section of the presidency is picking a bone with this patent fact. The section of the presidency in the pursuit of its agenda against the other, dug into the mud for slingshots under the cover of a polarising debate. My deduction, Osinbajo is the subject of Garba Shehu’s press statement glibly targeting Adeboye and others of kindred opinion. Though Shehu did not mention the name of the cleric explicitly, the trajectory of the dart was clear. The press statement was needless in that virulent form.

Osinbajo must maintain his candid-speaking tempo, if he wants the warmth and approval of the masses. But it will not come easy because he is a part of the system citizens are railing against. He must go beyond words and walk the rope. He must be genuine about of his ‘’activism’’. If it is the 2023 election that he is angling for by his reformist public statements, then Nigerians have already seen through his insincerity.

Fredrick Nwabufo is a writer and journalist
Twitter @FredrickNwabufo

3,287 children have been treated for malaria in Borno this year