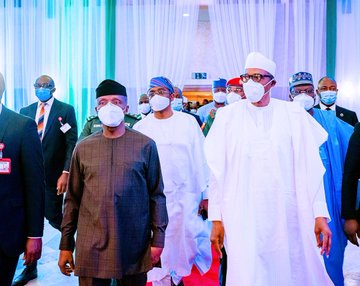 The misconception of the roles of the Legislature in government by the Executive arm and the public often time is responsible for the frequent frictions between the two arms, Speaker of the House of Representatives, Rep. Femi Gbajabiamila has said.

Gbajabiamila said though lawmakers’ attempt to adhere strictly to their legislative responsibilities often lead to friction with the Executive, the constitutional responsibility of oversight of government’s Ministries, Departments and Agencies (MDAs) has always been a major point of disagreement between the two.

The Speaker said to address the issue, a better understanding of the Legislature and its constitutional duties and the dissemination of legislative activities by the Nigerian media would enable Nigerians to appreciate their representatives more as well as have a full grasp of issues at stake from an informed position. Gbajabiamila spoke on Monday at a 2-day dialogue session for senior members of the Executive and Legislative branches of government aimed at enhancing partnership, good governance and effective delivery of public goods and services hosted by President Muhammadu Buhari at the Banquet Hall of the State House, Aso Villa, Abuja.

The Speaker, who led members of the House to the retreat, however, noted that as long as the nation’s system of government rests upon a partnership between the Executive and the Legislature, the most important of their functions is the obligation to check and balance each other.

In his address titled, ‘Building effective partnership for good governance and delivery of government’s priority agenda,’ Gbajabiamila noted that for the delivery of good governance, legislative oversight must not be seen as an attempt to usurp the authority of the Executive, instead, it should be seen as good efforts to ensure that the government lives up to its obligations under the law.

He said: “The misconception of the legislative function in a democracy is one of the biggest threats to effective cooperation between the Executive and the Legislature.

“One of the greatest of such misconceptions is that the Legislature exists only to make laws. The media and indeed large sections of the public assess the performance of individual legislators against this index of the number of bills sponsored and passed into law.

“The primary role of the legislator is to participate in the process of policy development and implementation as a representative of the people on whose behalf he serves, always acting to ensure that their views form part of the policy considerations and their interests are protected.
“It does not fall to the Legislature to implement projects that have been appropriated for through the appropriation process. That is an exclusive responsibility of the Executive.

“The oversight responsibility of the Legislature flows directly from our constitutionally mandated role as the keeper of the public purse responsible for ensuring that disbursement of funds from the purse is conducted in accordance with laid down rules, and for public benefit.

“It is my experience in the House of Representatives that most of the conflicts between the Executive and Legislature arise from the exercise of the legislative oversight function.
“It is, therefore, necessary to reiterate that the oversight function of the National Assembly is not the creation of parliamentary exuberance or an attempt at interfering with the proper administration of the executive role.
“Parliament acts in oversight because this is what our Constitution demands and as authorised by law.
Furthermore, Gbajabiamila identifies requests for information as another major source of conflict between the Legislature and the Executive, saying, “Requests for information, for records and for officials to appear before the legislature to provide clarity on matters of importance are legitimate legislative tools, authorised by the Constitution.

“The present upheavals at home and across the world make it clear that the old practices are insufficient to deliver our best and highest aspirations. We have an opportunity to remake our system of government so that we are better able to provide roads and electricity, security and social protection, a safe environment and a functional justice system that allows our people to live lives of peace and productivity.

“If we will succeed in these objectives, we will do so by working together in one accord, bound in the knowledge that by our joint effort, we have it in our power to overcome the present challenges and thrive in the new world that emerges from this moment,” he added.