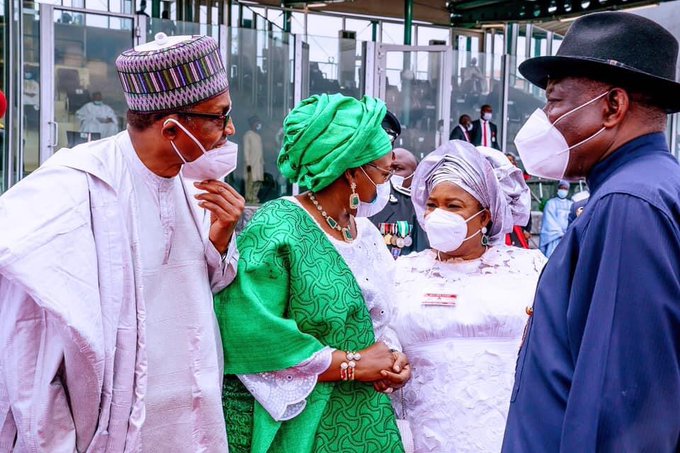 THISDAY Newspaper is reporting that, “The thinking is that it will satisfy the increasing clamour for power shift to the South. Buhari’s close loyalists believed that Jonathan would be harmless to their group interest and as such the right person to take over if power were to shift to the South, “he handed over power peacefully and nursed no bitterness against anyone and therefore will not be a threat to the interest of the north,” according to a top source in Buhari’s camp who didn’t want to be identified.

The story reads in parts, “The attraction to Jonathan’s possible candidacy is that he will serve just one term of four years.
In a related development yesterday, the main opposition Peoples Democratic Party (PDP), disclosed that it would not discriminate against any person in the build-up to the next presidential election on its platform, including a former Vice President, Alhaji Atiku Abubakar, who the party said was free to take another shot in 2023.”

According to multiple sources within the northern establishment , “the former president is a good man, he did well in his first term and we believe he has learnt his lessons and where he failed and is unlikely to repeat those mistakes that cost him the presidency in 2015. He did alot for the North, so why not?” Another source privy to the development also told THISDAY last night “yes we are looking at the Jonathan option, he is a safe bet and of course a very amiable gentleman, who is not likely to rock the boat.”

Thus, within the northern establishment, the consensus is beginning to gain momentum, with Buhari’s loyalists pushing the button to have Jonathan succeed their boss.
THISDAY checks also showed a growing number of influential northern leaders of thought are favourably disposed to the idea of Jonathan’s second coming.

This is particularly because a majority of those, who have bought into this idea, were of the view that the former president represented the shortest route for the north to regain power.
By virtue of the provisions of the 1999 Constitution as amended, one can only be sworn in as president for two terms of four years, although Jonathan too had also taken the oath of office twice.
Those supporting Jonathan reason that if another southerner emerges, more so a young candidate, he is likely to spend eight years in office before power returns to the north.

The north, and Buhari in particular are said to be impressed with the way Jonathan conceded defeat and proceeded to hand over power, when he lost the 2015 election and the way he has since conducted himself out of power.
Multiple sources told THISDAY that Buhari and his loyalists have over the years come to see Jonathan as someone, who is trustworthy and dependable, and to whom he could hand over power in 2023.

For instance, they also point at the growing friendship and bond between both men, as Buhari on many occasions, had expressed his astonishment at the way Jonathan conceded defeat and praised him as a statesman.

One of such occasions was in January 2018, Buhari at a dinner for top members of the ruling All Progressives Congress (APC) at the presidential villa in Abuja had said he went temporarily into a coma when former President Goodluck Jonathan called him to concede defeat in the 2015 presidential election.

He had said then he felt Jonathan had stayed long enough in office to have caused problems when he lost the election. He described the former President’s decision to accept defeat as a “great” one.

“When the former president rang me, I went temporarily into a coma,” the president said.
“I will never forget the time. It was quarter past 5 p.m. and he said he called to congratulate me and that he had conceded.

“He asked if I heard him, and I said yes. I thanked him for his statesmanship,” he said.
“The truth is after being a deputy governor, a governor, vice president and president for six years, and he took that decision is great. He could have caused some problems. He had stayed long enough to cause problems.”

In 2015 after losing the election, in an unprecedented step, Jonathan had called Buhari to concede defeat and issued a statement the following after conceding, urging his supporters to accept the result. He urged his supporters to follow “due process” in channeling their frustrations at losing the election amid fear of violence. He re-echoed his now famous statement during the 2015 campaign that his his ambition was not worth the blood of any Nigerian.

“Nobody’s ambition is worth the blood of any Nigerian,” Jonathan said in a statement issued after his election defeat. “The unity, stability and progress of our dear country is more important than anything else.”

These loyalists of the president have further cited the fact that Jonathan was the only former head of state with Buhari during the 60th independence anniversary celebration of the country at the Eagle Square, Abuja.

Imo, Kwara, Gombe, Zamfara and other states we want to win got N1 billion each from Oshiomhole – Wambai