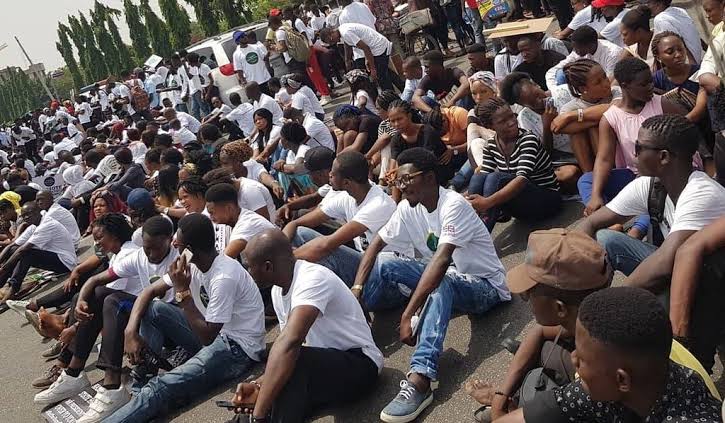 An experience that very well sets the tone for this piece is one I had with a man who has lived through the crests and troughs of the Nigerian experiment. He is one man who has stuck to one ideal for the most of his life, and even in his nineties, the passion and commitment has not waned.

He is one of the most vocal advocates of federalism. Many may already know the person I’m referring to. During a visit, I asked for his opinion on a political development we had just seen on the news at the time. He sharply retorted, ‘why are you asking for the opinion of a man in his nineties.

I’m on the way to the grave. How come you don’t have an opinion? You’re much younger and this development would affect you more. You should have an opinion!’ We went on to have a great chat that night but the lesson was not lost on me.

As a Nigerian of the third generation after his, the expectation was that my generation should be concerned and interested enough in the state of affairs to form informed opinions on matters of national relevance.

I believe that to be a decent expectation. And the reasons are not far-fetched. The youth have the incredible opportunity of having the strength and passion to pursue what we deeply care about. The youth in Nigeria are an extraordinary breed. Tell them something is impossible, and they will prove you wrong.

Tell them they can’t be anything in life and you’ll be disappointed. Tell them the sky is their limit, and that is where their journeys will begin. This is not simply fiction. It’s our everyday reality. Whether it’s in tech, entertainment, arts, business, fashion, sports, academics, they keep breaking records – national and global, like a habit. I’ll come to this later.

The other day a video of a young lady crying went viral on social. I saw it on Twitter. This young lady really cried. She cried so profusely that one could have guessed that she lost something so dear, or that she had been deprived of a reward she had worked so assiduously to earn. No, it was not any of these.

The object of her tears was to ‘protest’ an ‘injustice’ done to her favoured contestant by another contestant in a just-concluded reality TV show. Her outburst was quite something to watch.

I learnt a thing or two. Not in her crying, but in the passion. That’s the type that makes one uncomfortable with the status-quo. It’s the kind that propels one to unceasingly demand fairness and justice.

That shade is just enough to get this country on the right track. But that passion is only to be found in the hearts of the activated. The majority of the youth are not activated, they are sleeping! Totally uninterested. Totally clueless of the sordid state of affairs. Totally unthinking of the guaranteed outcomes if the current trajectory is continuously pursued.

There is no strong indication that Nigeria gives a damn about the youth except for a few unsustainable tokenistic programmes here and there. Despite making up more than 65% (18-35) of Nigeria’s population (est. 200 million), the system is rigged against them.

The frustration that the rigged system inspires is further worsened by the lack of jobs or profitable enterprises for most. This distortion results in the escapist mindsets, penchant for inanities, resort to get-rich-quick schemes and undying interest in fugacious thrills.

Unfortunately, they are not helped by the institutions with falling standards and inadequate funding. Many are declared unemployable as soon as they graduate from higher institutions of learning, and the narrative is that they lack the skills to compete in today’s intensely saturated labour market.

The best jobs go to those who know people in high places. They are then encouraged to be entrepreneurs, not job seekers, but then no one gives capital to starters. And the cycle of frustration goes on and on.

The point is: it’s an uphill task being a youth in Nigeria. Many have simply given up on the country. These ones would take the opportunity to leave Nigeria without thinking twice. They have just had enough of the system.

The others are either doing their best to survive or busying themselves with vanities. The latter are in an overwhelming majority. They are constantly on the lookout for fads and the next big thing. It’s always about what’s trending not what is enduring. But that’s how those who determine their fortunes want it. They don’t want them to be interested enough to challenge their recklessness and irresponsibility. But, for how long?

Young people have the advantage of age on their side, but that advantage is so swiftly taken away with the passage of time. Nature has guaranteed that. And so, now is the time to put the numbers to the best use. The youth represent the brightest ray of hope and redemption for this country. And it is on them that the task of building a nation must fall.

Not the politicians. Those ones are concerned about here and now. But the future is what’s at stake. The reasonable ones must realise that. All that misguided chattering on social media is for most part needless and unproductive. While you’re busy chasing the wind, the future is being messed up for you.

In this regard, the more ‘successful’ Nigerian youth owe a duty to raise the social consciousness of their coevals. They should be unequivocal in speaking against injustice. The task is not easy. No country has ever gone against a retrogressive order on the wheels of ease. Nigeria’s case would not be an exception. We have a long way to go. We can definitely be better than what has been made of Nigeria. It only takes a cursory look around to realise that we haven’t done much, if anything at all, with our potentials and promise. That is the truth.

It’s often been said that Nigerians are not as proud of Nigeria as they are to be  Nigerians. We even talk about the ‘Spirit of Naija’. We can change the distasteful narrative.  The future of every Nigerian youth is somehow tied to the fortunes of Nigeria, and so, the right questions must be asked.

If the youth keep sleeping, someday they will wake. And they would be awoken to an overwhelmingly messy situation that they did nothing about while the rot deepened. I sincerely hope this doesn’t happen.

A word on the Lagos-Ibadan Expressway

The Lagos-Ibadan Expressway project has now been on for forever. Journey on that road, particularly the Lagos-Sagamu stretch (Mowe/Ibafo), can be very unpredictable and dispiriting. Nigerians are really going through a lot. The experience on the road further compounds the frustrations of commuters as they go about their daily pursuits.

Some pedestrians are also responsible for the gridlock as some would rather cross the road than make use of the pedestrian bridges provided by the government. This practice should be discouraged. While the efforts to fix the road is commendable, a major concern is that the project is still very far from being completed. Every option to bring respite to commuters in the shortest possible time should be explored.

I would like to heartily congratulate Nigerians on this anniversary of our diamond jubilee as an independent nation. 60 years is really a long time, and Nigeria’s story so far is, by any standard, a miracle. But there’s still so much to be done in building a nation where ‘freedom and an abundant life is guaranteed to every citizen.’ May we, once again, be that nation of reference. And may our youth be leaders of a Nigeria that is the pride of Africa and the world.

Cheta Nwanze: Between the bar and the bench

Alwan Hassan: An Open Letter to the Leaders and the Young People of the APC