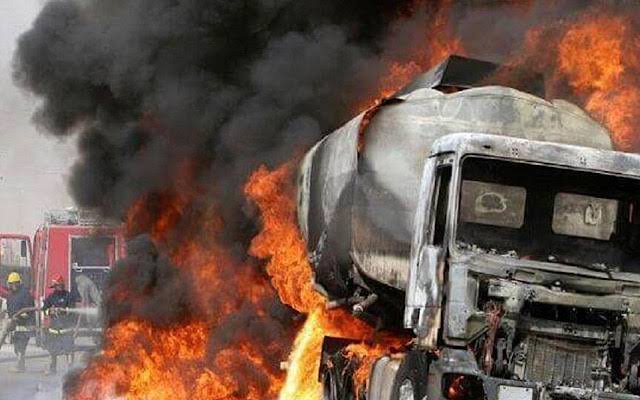 23 people have died in a fuel tanker fire accident which occurred at Felele area of Lokoja, Kogi, in the early hours of Wednesday.

Ali said that three of the children were females while the remaining four were burnt beyond recognition.

He said five of the dead victims were students and staff of the Kogi State Polytechnic located few metres away from the scene of the incident.

According to him, 24 people were involved in the accident which occurred some minutes before 8 am, and that only one female child survived with a minor injury.

The commander said that 10 vehicles, including five cars, three tricycles, and two motorcycles were also burnt in the inferno.

He said that the corpses had been deposited at the Kogi State Specialist Hospital, Lokoja, where the only survivor was also receiving treatment.

He said that 11 corpses had been claimed for burial by their relations.about:blank

News Agency of Nigeria (NAN) reports that the incident has thrown some schools that lost their children in the accident into mourning as they hurriedly closed down.

One of them is the Baptist Group of Schools at Ganaja, which lost three pupils and their parents to the accident, and whose management immediately closed the school till September 28 in honour of the deceased.

NAN gathered that the accident occurred when an Abuja bound fuel tanker had a brake failure and in the process fell down at a spot close to GT Plaza and spilled its content on the road, which immediately ignited fire.

The fire engulfed the entire spot and extended to other parts of the area, including a major a bus stop where school children, workers, and other people were waiting to board vehicles to their various destinations.

The governor’s reaction was contained in a statement signed by his Chief Press Secretary, Mr Mohammed Onogu.

Bello lamented the loss of lives and property in the accident which he described as very sad and tragic.

He expressed his deepest condolences to the relations of the dead victims and grieved with those that lost their property.

He also commiserated with the students and staff of the state Polytechnic, urging them to remain calm and peaceful and bear the loss of their colleagues and staff with great fortitude.