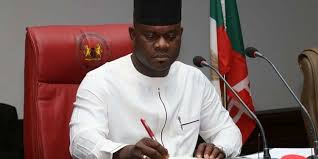 The Kogi State governor, Yahaya Bello, has protested the visa restrictions placed by the United States government on sponsors of violence in the Kogi and Bayelsa states governorship elections.

The American government had imposed visa restrictions on some Nigerians for undermining electoral processes in the elections.

NewsWireNGR recalls that the Kogi State election was marred with different irregularities and violence. Ballot boxes were snatched and voters were intimidated by thugs in many polling units.

In a protest letter sent to the American embassy in Nigeria, Mr Bello accused the U.S. of partisan politics. The letter dated September 16 was written by the secretary of the state government, Folashade Ayoade.

Mr Bello noted that the state is only bothered by the timing of the press statement and the mention of the Kogi elections.

He also stated that the regrettable incidents at the polls were limited to a few polling units, insisting that larger portions of the ballot were free, fair and credible.

“For the most part, we concede that elections in Nigeria are complex affairs which will continue to require improvements for the foreseeable future. The 2019 Kogi State gubernatorial election was also not without its challenges. However, it is also crystal clear from critical and composite analyses of the records (official, media, observers, etc) of the November 16, 2020 polls that regrettable incidents were limited to a few polling units, while the overwhelmingly larger portions of the ballot were free, fair and credible.”

“Further, and in line with Nigerian law, the few political parties and individuals who alleged widespread electoral malpractices had free rein to contest the outcome in court. They vigorously litigated their claims over a grueling nine-month period, through a three-step hierarchy of courts, to the inescapable conclusion at the Supreme Court of Nigeria that the said elections satisfactorily complied with the Nigerian Constitution and the Electoral Act.”

He said the presumption is that in spite of the U.S. intervention, the Supreme Court still discovered no merit in the petitions against him and dismissed them accordingly.

“The inference from your timing is that the judgment is somehow tainted and did not meet the justice of the case, thereby casting aspersions, not only on the Nigerian judiciary, but on the second term mandate freely bestowed on His Excellency, Governor Yahaya Bello by the good people of Kogi State.”

“We find this unacceptable, and we protest your presumption. The least you could have done, if indeed this is about democracy and human rights as claimed, is create room, no matter how slim, for fair hearing. As it is now, partisan speculation as to who is indicted, who is not and for what, has become cudgels, furiously swung in the media space by all comers. Your action has therefore added abundant grist to the rumour mills and electrified the merchants of fake news.”

“We believe that if the United States of America, despite her commanding heights and much longer experience as the acclaimed bastion of democracy in the world, is still locked in a fight to defend the integrity of her own electoral processes to this very day, then she ought to accord greater empathy, more civility and much less disruption, to nascent democracies,” he wrote.

After US, UK also threatens sanctions against violence sponsors in Edo, Ondo Polls