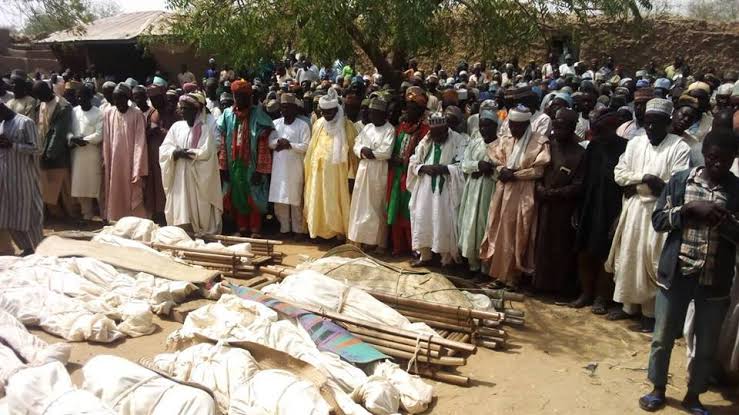 The Nigerian authorities have left rural communities at the mercy of rampaging gunmen who have killed at least 1,126 people in the north of the country since January, Amnesty International said today.

The organization interviewed civilians in Kaduna, Katsina, Niger, Plateau, Sokoto, Taraba and Zamfara states, who said they live in fear of attacks and abductions as insecurity escalates in rural areas. Many of those interviewed described how security forces often arrive hours after attacks have ended, even when officers have been given information
about impending attacks.

During one attack in Unguwan Magaji in Kaduna state, security forces arrived at the scene but left when they saw the sophisticated ammunition the
attackers were using.

By the time they returned, at least 17 people had been killed.

Amnesty International has documented an alarming escalation in attacks and abductions in several states in north west and north central Nigeria since January 2020. Worst affected are villages in the south of Kaduna State, where armed men killed at least 366
people in multiple attacks between January and July 2020.

“Terrifying attacks on rural communities in the north of Nigeria have been going on for years. The ongoing failure of security forces to take sufficient steps to protect villagers from these predictable attacks is utterly shameful,” said Osai Ojigho, Director of Amnesty International Nigeria.

“In addition to the security forces’ failure to heed warnings or respond in time to save lives, the fact that no perpetrators have been brought to justice leaves rural communities feeling completely exposed. The President claims he has repeatedly tasked security agencies to end the killing so that Nigerians can go to bed with their eyes closed, but clearly nothing has changed.”

Houses burned, villagers abducted At least 77 people have been killed since January 2020 in the ongoing communal clashes between the Jukun and Tiv ethnic groups in Taraba state, northeast Nigeria.

The ethnic conflict between Jukun and Tiv ethnic groups has been on and off since the early 1990’s
as authorities consistently failed to end the conflict.
On 28 May, at least 74 people were reportedly killed in Sokoto state, when gunmen attacked four villages in Sabon Birni Local Government Area.

According to witnesses interviewed by Amnesty International in Kaduna, Plateau and Katsina states, the attacks are well coordinated. Attackers stormed villages on motorcycles and heavily armed. They shoot sporadically at people, set houses on fire, steal cattle, destroy farm produce and abduct villagers for ransom.

Most villagers told Amnesty International that the government left them at the mercy of their attackers. They complained of receiving little or no help from security officials during attacks, despite informing them prior or calling for help during attacks. They lamented that, in most cases, the security forces arrived hours after attacks.

A witness to an attack in Unguwan Magaji in southern of Kaduna said: “During the attack, our leaders called and informed the soldiers that the attackers are in
the village, so the soldiers did not waste time and they came but when they came and saw the type of ammunitions the attackers had they left. The following morning so many soldiers came with their Hilux pick-up trucks to see the dead bodies.”

Escalating violence in southern Kaduna In response to increasing violence in the south of Kaduna State, the State Governor imposed a 24-hour curfew in affected communities in June 2020, but attacks have
continued. Violence has been on and off in southern Kaduna since the aftermath of 2011 elections and authorities have failed to both end the violence or bring the perpetrators to justice.

On 6 August at least 22 people were reported killed when gunmen suspected to be herders attacked four communities in Zangon Kataf Local Government Area of the state.

More than 100 people were killed in July during 11 coordinated attacks in Chikun, Kaura
and Zangon-Kataf Local Government Areas of the state. At least 16 people were killed in Kukum-Daji on 19 July 2020, in an attack that lasted for five minutes, when attackers shot sporadically at villagers.

A farmer in Kukum Daji whose son was killed during the attack informed Amnesty International: “My son was 20 years old, he had just gotten admission at University of Jos. He was at home due to the Corona pandemic, then the attack happened. When I saw his dead body, my body became very weak, I started feeling dizzy, I thought I was going to fall, my whole body was on fire but there was nothing I could do, I just told myself that am leaving everything to God. I will never be happy again in this life for losing this boy. His death has really affected me”.

Some victims of the recent attacks in southern Kaduna told Amnesty International that security forces were absent during most of the attacks, arriving only hours after the attackers had left. In rare cases when security forces arrived during attacks, they often came with inadequate intervention.

The violence has forced many farmers and their families to flee their homes. In Katsina state, at least 33,130 people are now in displacement camps, and others have gone to stay with relatives in urban areas.

Thousands of farmers could not cultivate their farms
during the 2020 rain season because of fear of attacks or abduction.

“These attacks have caused massive displacement and food insecurity in the affected states. The majority of the people in these communities depend on farming for their livelihoods, but they are now too afraid to go to their fields,” said Osai Ojigho.

“This is pushing the region to the brink of a major humanitarian crisis. The Nigerian authorities’ failure to stem the violence is costing people’s lives and livelihoods, and without immediate action many more lives may be lost.”

A 50-year-old farmer in Batsari Local Government Area of Katsina State told Amnesty
International: “Our village has been attacked several times. Not once, not twice, but 10 times. To farm
is even a problem, the bandits have stopped us from going to our farms, we only cultivate the farms close to the house but our farmland in the bush, we can no longer go there to farm, they stopped us from going there. My family farm that was not cultivated this year is more than 300 hectares of land.”

At least 380 people have been abducted for ransom during attacks in Kaduna, Niger, Katsina, Nasarawa and Zamfara states in 2020, mostly women and children. Largely, relatives of those abducted sell all their belongings to pay ransom to the gunmen and those unable to pay are mostly killed.

According to a witness, at least 17 women were abducted on 20 July in Safana Local Government Area of Katsina State, in an attack that lasted for almost three hours.

Arrested for Daring to Seek for Better Protection

Not only has the government failed to take the steps needed to stop these attacks, police regularly punish those who dare to ask for more protection. Amnesty International has documented how farmers, rights groups, and activists are subjected to intimidation, arrest and torture for speaking out against the attacks or asking government to help protect the
people.

On 8 August at least 3 people were arrested during a peaceful protest at Refinery Junction, Kaduna South, and on 18 June, at least 20 protesters were arrested and detained for days by police in Katsina State.
On 17 June, Nastura Ashir Sharif – an activist was arrested for speaking out against the killings and leading protests calling for an end to the rising insecurity in the country.

On 10 April, a youth from the Oureedam community in the Bassa area of Plateau State was arrested after complaining that security forces had arrived late to an attack. He said he was beaten and was made to roll on a wet floor. He was eventually released when a
lawmaker representing his community intervened.

“In their response to these attacks, the Nigerian authorities have displayed gross incompetence and a total disregard for people’s lives.

Arresting people who dare to ask for help is a further blow. Instead of arresting critics, the authorities should be seeking urgent solutions to this crisis and doing all they can to prevent further attacks,” said Osai Ojigho. Amnesty International is calling on Nigerian authorities to independently investigate all
these deaths and ensure accountability by bringing the perpetrators to justice.

Spate of these killings is an evidence of failure of authorities to protect the people. Inability of
authorities to bring attackers to justice is fueling dangerous conspiracy theories that only escalate the violence.

“The government has an obligation to protect its population. The rising death toll in the north of Nigeria shows just how badly the authorities are failing in this responsibility.”

Amnesty International Nigeria has been monitoring the banditry attacks and clashes by herders and farmers since 2016. In December 2018 we published a report, based on years of research, that documents the violent clashes between members of farmer communities and members of herder communities in parts of Nigeria, particularly in the northern parts

As schools reopen, Here are the facts you need to know about COVID-19 transmission among children

For 13 months, these health workers in Ondo State have been denied their Salaries