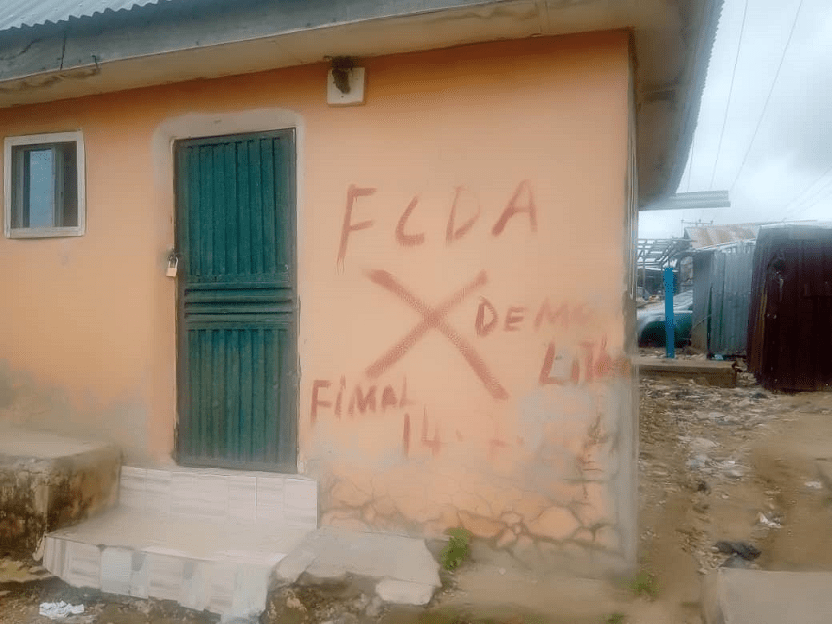 The Nigerian Federal Capital Territory Administration (FCTA) has commenced the demolition of over 102 houses built along water channels following last week’s flood incident that claimed a family of 5 in Giri-Kpasere, along Airport Road, in Gwagwalada Area Council.

The FCT Department of Development Control said the illegal houses have been marked more than one year ago, and that government had given the residents enough time to move out of the flood prone areas.

The Deputy Director, Monitoring and Enforcement, Department of Development Control,  Garba Kwamkur, said government could not spare the houses anymore, following the recent forecast of more rains and consequential flooding that will affect the area.

Kwamkur noted the community is part of the land covering about 260 hectares allocated within the Abuja Master Plan for the development of the University of Abuja, Gwagwalada, but some indigenous people and other squatters are staying there temporarily.

He said that; “the university has written to us about the encroachment issue. The settlement here that’s due for resettlement has grown beyond it’s boundary. And we have issue of flood some time last week, where five persons, who were carried away by the flood, were confirmed dead.

“We actually had to discuss it with the village leaders on the need to move away from the flood plain area. The  Federal Emergency Management Agenc, FEMA has also predicted that there would be heavy flood this year, so we are doing something like a precautionary measure, that’s why all the buildings along the flood plains will have to go.

“And all contravention notices have been given as far back as last year (2019). No government will sit down and do nothing when the lives of its citizens are being threatened by either flood or any other thing.”

The Chief of the Community, Mr. Isah Egari who said he is not opposing the demolition of the houses built on the water channels, however, pleaded with government to give the residents more time to move out from the affected places.

Egari also called on the demolition team to restrict the bulldozers to the areas close to the water channels, to avoid imposing undue hardship on other residents who are not affected.