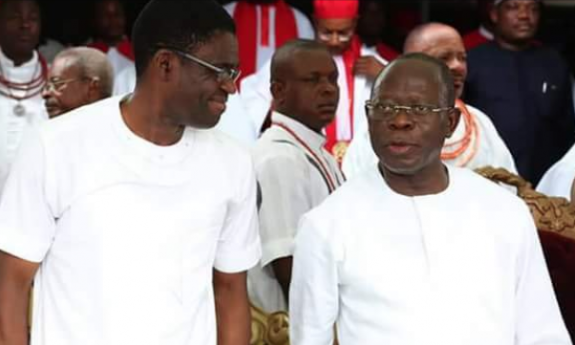 Edo state Deputy Governor, Hon. Philip Shaibu, has accused the deputy speaker, Hon. Yekini Idiaye, and another member of the house, Hon. Emmanuel Agbaje, of collecting N40 million each from the former national of the All Progressive Congress, Adams Oshomhole, to support the party’s candidate in the forth-coming election, Pastor Osagie Ize-Iyamu.

“Hon Agbaje and Hon. Yekini collected N40 million each to sell their support for Ize-Iyamu. Oshiomhole also gave N5 million each to councilors to switch loyalty and support the APC candidate.

I had a meeting with these lawmakers who demanded $10,000 but I told them Obaseki is not a governor that shares money but uses such money for the development of Edo State. Use your Permanent Voters Card (PVC) to vote these corrupt leaders out of office”, Shaibu charged the people.” He said

The Deputy Governor, then called on the people of Akoko-Edo Local Government Area (LGA) to ask their representatives at the state’s House of Assembly, Hon. Yekini Idiaye and Hon. Emmanuel Agbaje, for their share of the N40 million given to each of them by Adams Oshiomhole, to influence their support for the APC candidate, Pastor Osagie Ize-Iyamu.

The Peoples’ Democratic Party (PDP) governorship candidate and Edo State Governor, Mr. Godwin Obaseki, and his Deputy, Shaibu, on Monday kicked off their re-election campaign in Edo North Senatorial District, with a visit to the palace of the Otaru of Igarra, Oba Emmanuel Adeche Saiki II, where were received by the traditional ruler and his people.

Related Topics:Edo State Governor
Up Next