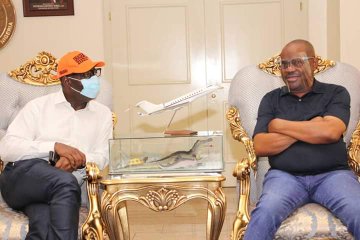 Rivers State Governor, Nyesom Wike, has called on the Independent National Electoral Commission and security agencies to be apolitical in the September 19, 2020, governorship election in Edo State.

Wike, who made the call while speaking on a live television programme, charged the electoral umpire to use the Edo election to correct its previous mistakes, saying Nigeria, as the giant of Africa, should model free and fair poll for other nations.

Wike, who is the Chairman of the Peoples Democratic Party National Campaign Council for Edo governorship election, said the poll would be a walk-over for Governor Godwin Obaseki.

The governor, in a statement by the State Commissioner for Information and Communications, Paulinus Nsirim, said the success of the Edo election would be determined by the roles played by security agencies and INEC, saying, “This is so because they often interfere with electoral processes, which manifests as scuttling of the will of the electorate.”

He added, “I do not know if I have one hundred per cent confidence in INEC for now but maybe, as the days go on, what we will see may give us hope.

“Nigeria prides itself to be the giant of Africa and we go to other countries to observe elections and adjudge them as free and fair. But we find it difficult to do the same here. We must show one good thing people can learn from us.

“We want a free and fair election. INEC should not be partial. They should use this election to correct the mistakes that have been done in the past. We want to see what was done under President Goodluck Jonathan when Adams Oshiomhole went to Aso rock to thank him for allowing free and fair election in Edo State then.

“We are appealing to President Muhammadu Buhari to direct that democracy be protected in the Edo election so that one man one vote will count. We will also go to Aso rock to thank him.”