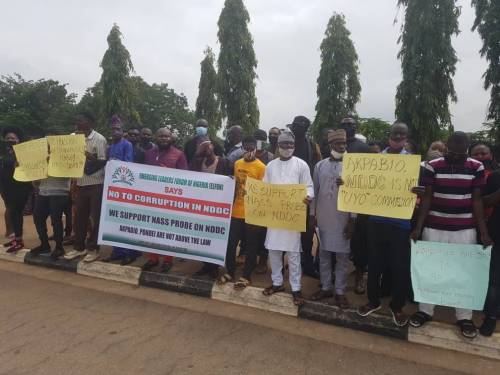 Two groups of protesters have besieged the premises of the National Assembly Abuja as lawmakers continue probing the management of the Niger Delta Development Commission, NDDC.

The Pro-group tagged, Emerging Leaders Forum of Nigeria, staged a protest at the National Assembly, Abuja, early Monday at the resumption of Plenary, calling for the probe and removal of Minister of Niger Delta Affairs, Godswill Akpabio, over the illegal expenditure and mismanagement in the Niger Delta Development Commission.

The group led by Mr Okeahialam Cherech called for the suspension and arrest of the minister pending the conclusion of the investigation by the committee.

The protesters stormed the main gate of the National Assembly chanting anti-Akpabio songs according to SR.

The group called for the continuation of the probe, adding that the chilling revelations made so far had warranted the sack and arrest of the minister.

Meanwhile, another group named Niger Delta Development Initially led by one Mr Phil Robbert insisted that the forensic audit must go on.

The group said the attack on the minister was unwarranted and Nigerians should allow Akpabio to work for the good of Niger Delta people and not to be distracted.

At time of filling this story, armed policemen had taken over the entrance of the complex to prevent breakdown of law and order.

Akpabio will be appearing to testify before the committee today.