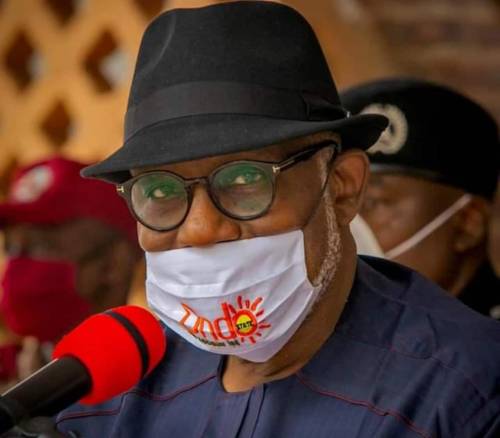 Governor Rotimi Akeredolu of Ondo state has said that he would not transmit power to his defected deputy, Hon Agboola Ajayi despite his COVID-19 status.

Akeredolu who tested positive to the pandemic on Wednesday and had since gone on isolation said he would work from home.

The governor denied that government activities have been grounded as a result of his COVID-19 status Speaking through his Information and Orientation commissioner, Donald Ojogo in Akure, the governor said that the deputy governor “is a threat to good governance in the state.

“ ln any case, those of us in government and believe strongly in this government see the deputy governor as the greatest threat to good governance in Ondo state and you can’t attempt to handover to people like that. Agboola Ajayi is the greatest threat to this government. “ l don’t know how and we got into this, what we witnessed in 1983, the level of treachery that was deployed against late Adekunle Ajasin. “Except for those who have the opportunity to witness what we are seeing in Ondo state , one may be tempted to say that was the height or nothing could surpass level of treachery but what we are seeing today represent the fact what Omoboriowo did in 1983 was a child play compared to what Agboola Ajayi is doing now. “ You don’t rock a boat that has taken you across the ocean, so it is a non issue and we are not even considering handing over to Agboola Ajayi and I know as a matter of fact that no one who believes in good governance in the state will even advise Akeredolu to hand over to his deputy. What would be the compelling reason when governance is not grounded “ He has created an unusual scenario upon which he wanted to climb to his next political ladder and we have already seen as a misadventure, we cannot toy with what we have built over the years, we cannot risk it and attempt to hand over to someone who has exhibited mindless level of betrayal and an unquestionable level of treachery.

“This is not done and unthinkable, un-debatable and if that is the reason he has been sponsoring write ups to say there is likely to be vacuum, the governor must hand over to him, he’s only joking. “ It is not going to happen because the governor is hale and hearty. COVID -19 is not a death sentence and the governor is strong enough to work. “ For the deputy to insinuate, incite or instigate people to be stirring the water to say that the governor should had over to him, confirms our fears in the last ten months that Agboola Ajayi has been striving to take over power through the back door and God will not allow him.