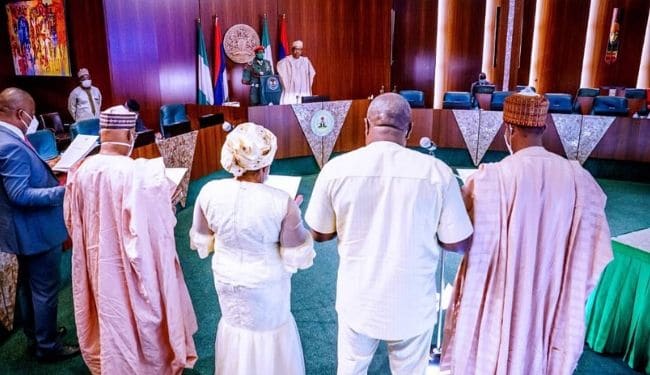 President Muhammadu Buhari has urged the newly inaugurated Chairman and members of the Revenue Mobilisation, Allocation and Fiscal Commission, RMAFC, to drive the necessary process to mobilise funds from the non-oil sector.

The President said this becomes necessary in the face of serious shortfall in the country’s earnings occasioned by the Covid-19 pandemic.

Secretary to the Government of the Federation, SGF, Boss Mustapha conveyed the expectations of the President from chairmen and members of the Federal Character Commission, FCC; Federal Civil Service Commission, FCSC and the Revenue Mobilisation, Allocation and Fiscal Commission after their inauguration at the Presidential Villa Abuja. Members of the 3 commissions were administered the oaths of office and allegiance in batches of five persons per group

In May, the Minister of Finance, Budget and National Planning, Zainab Ahmed, revealed that Nigeria’s oil revenue target fell by N125.52 billion in the first quarter of 2020 to N940.91 billion.

She attributed the 31 per cent shortfall, to the Covid-19 pandemic and the slump in oil prices due to a sharp drop in demand and price war between the two powerful oil producers, Russia and Saudi Arabia.

Speaking with State House Correspondents at the end of the ceremony which also had Vice President Yemi Osinbajo, Kwara Governor Abdulrazaq Abdulrahma, Chief of Staff to the President, Professor Ibrahim Gambari and ministers, the SGF said President Buhari urged the commissions to take their constitutional responsibilities seriously so that the administration will deliver on its Next Level Agenda to the Nigerian people.

Members of the RMAFC sworn-in are, Ahmed Yusuf from Taraba; Bello Wamakko from Sokoto; Oladele Gboyega from Osun; Adamu Dibai from Borno; Alfred Egba from Bayelsa and Hajiya Salamatu Bala from Adamawa.

The Nigerian leader also swore-in Muheeda Dankaka as the Chairperson of the FCC and 36 other members of the board.