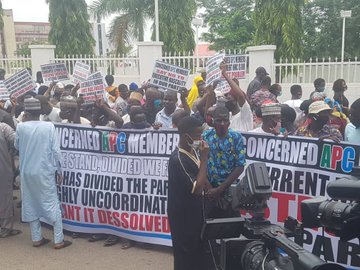 Hundreds of protesters are currently at the secretariat of Nigeria’s ruling All Progressives Congress (APC) in Abuja, to demand the sack of all members of the party’s National Working Committee (NWC).

The about 50 protesters mostly young people are expressed their concerns on the crisis rocking the party and the role of the NWC in it.

The Protesters under the platform of Concerned All Progressives Congress Members are calling for the dissolution of the present National Working Committee of the party.

The protesters gave President Muhammadu Buhari and National Executive Committee of the party 72 hours to convey an emergency meeting and dissolve the present NWC.

Leader of the group, Opokwu Ogenyi, said the present NWC had caused more harm and bastardised the party and that there was the need to salvage the party from total collapse.

At the time of the protest, President Muhammadu Buhari was in a closed-door meeting with governors elected on the platform of the All Progressives Congress (APC).

The meeting, at the Presidential Villa, Abuja, is believed to be a move to resolve the multiple challenges threatening to tear the party apart.

Some of the APC governors at the meeting are those of Kebbi (Atiku Bagudu) Jigawa (Abubakar Badaru) and Plateau (Simon Lalong).

The meeting held less than 24 hours after a separate meeting between Senate President Ahmad Lawan and Mr Buhari.

Related Topics:NigeriaNational Working Committee
Up Next

“Souls are perishing, in your own home state of Katsina” – Solomon Dalung, Attacks President Buhari