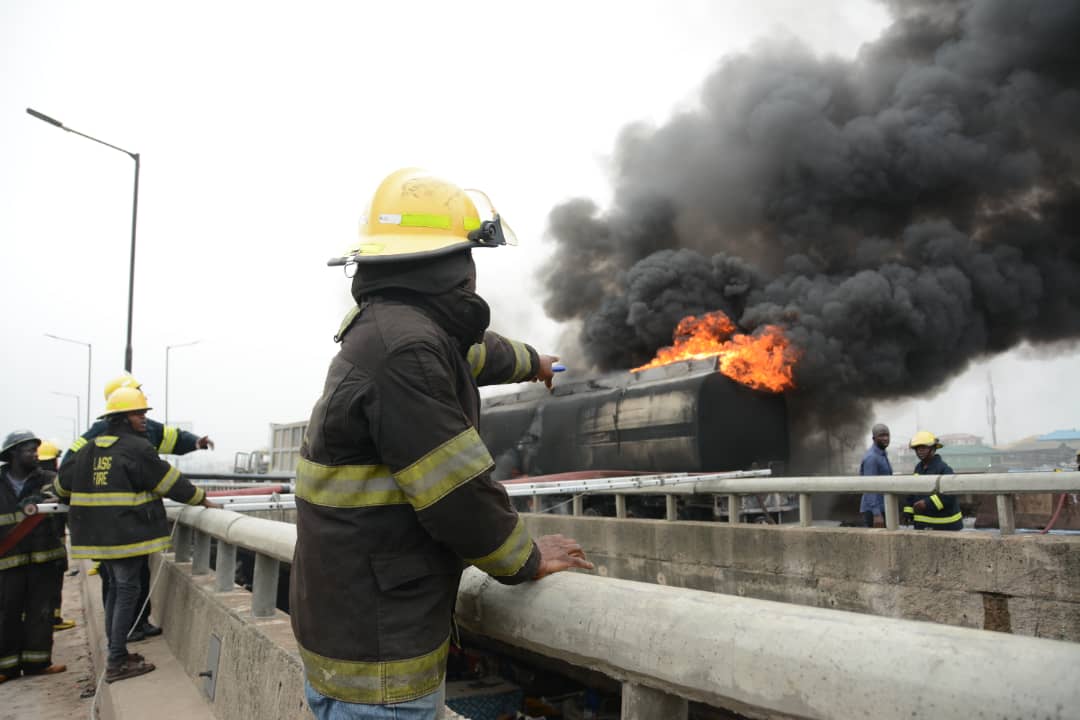 The News Agency of Nigeria (NAN) reports that rescue operations were still ongoing at the scene of the accident involving three tankers and a truck.

“The inferno as a result of the explosion  is almost getting to an end. The fire services are  still here from Lagos and Ogun states.

“So far, we have been able to move two casualties to the General Hospital Gbagada. One was burnt beyond recognition.

“The accident involved three tankers and one truck. Two of the tankers carrying petrol, another carrying gas and an articulated truck,” he said.

On the possible cause of the accident, Ogungbemide, who noted that  investigation was still ongoing, said that observations revealed that one of the tankers lost control and rammed  into others which resulted in the explosion.

“It was a loss of control. One of the tankers that rammed  into other vehicles either had break failure or got distracted. Investigation is still on, we can’t just be accurate now,” he said.

FRSC had earlier announced diversion of traffic on Lagos-Ibadan Expressway,  following the explosion to avert a chaotic traffic situation on the busiest highway.

To cushion the effect on the road users, FRSC temporarily diverted traffic between New Garage and the end of Kara bridge to allow a counter-flow for Ibadan bound traffic to use a lane from the Lagos bound section of the expressway.

“FRSC hereby admonished motorists using the temporary lane to obey instructions from traffic officials around the scene of the crash and urged them to drive with caution,’’ Ogungbemide said.

According to him, while the burning fire is being extinguished and waiting to clear up the wreckages off the road, motorists who are not close to the scene are advised to explore alternative routes.

“Those travelling from Ibadan may turn at Sagamu interchange and use Abeokuta to Lagos through Sango Otta, Abule Egba, Iyana-Ipaja.

“People travelling out of Lagos may also use the above route and travellers from Lagos Island can explore Victoria Island, Ajah to Ijebu Ode to continue their journey.

“However, motorists around Mowe, Ibafo entering into Lagos or vice-versa using the temporary lane should please drive with extreme caution.”

The sector commander, who urged motorists to drive with care, said that FRSC wished everyone safe journeys to their various destinations.