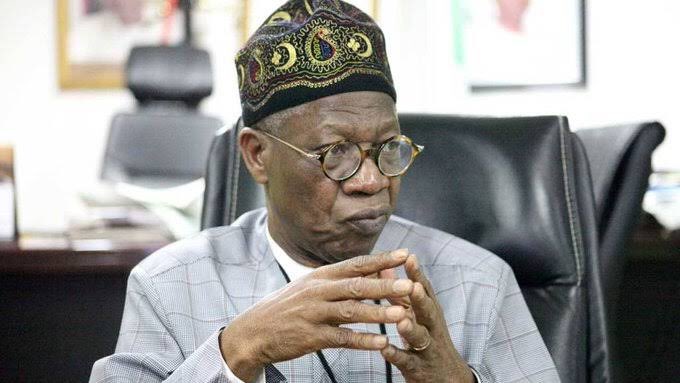 The Minister of Information and Culture, Alhaji Lai Mohammed on Tuesday pledged to assist in the process of securing the N10 billion Nigeria Media Intervention Fund from the Central Bank of Nigeria (CBN).

The minister made the promise in Abuja at a virtual meeting with the Newspapers Proprietors Association of Nigeria (NPAN) on the effects of the Coronavirus (COVID-19) pandemic and the media and efforts to salvage the industry.

The News Agency of Nigeria (NAN) reports the meeting presided over by Mr Nduka Obaigbena, the Chairman of NPAN and founding Chairman, This Day Media Group was attended by representatives of major traditional media outfits, the new media and Guild of Editors.

While responding to the requests by the association, Mohammed assured that he will follow up on the loan request to ensure it is granted in zero or single digit interest rate.

“I can assure you that I will take your message to the CBN Governor and I will also raise the matter at the next Federal Executive Council meeting on the need to salvage the industry,” he said.

The minister equally assured that he would meet with the Minister of Finance and the Comptroller-General of Customs on the request of NPAN for waivers and relief tariff in the importation of media equipment and consumables.

Mohammed underscored the importance of the media in managing the COVID-19 pandemic through mobilisation and sensitisation especially at the time when there is no known vaccine or medicine for its cure.

He called on the NPAN to make available to him a proposal on how government can influence Facebook, Google, Twitter and other social media platforms to pay for the contents sourced and used from the Nigeria media.

“if I get the a proposal from you, I will work on it speedily because I am more than willing to ensure that content owners get maximum reward on their intellectual property and productivity,” he said.

The minister said that the government has not neglected any sector, including the media since the COVID-19 started and it has been working to mitigate the effects of the pandemic on the economy.

He stressed that the importance of the media cannot be overemphasized in mobilisation and sentisation of Nigerians to the reality of the pandemic and the preventive measures from contracting and spreading it.

“We are thanking you for the sacrifices you make daily to bring our messages to the public through the advertisement, messages and daily coverage of our briefings which some broadcast live.

“A recent survey conducted showed that 99 per cent of Nigerians are aware of the pandemic while 95 per cent know what to do to avert contracting it, and this is made possible by the media,” he said.

Mohammed, however, called for the understanding of the association on the reality that all the sources of government revenue had been affected by the pandemic.

He disclosed that the capital budget of the Ministries had been slashed by 20 per cent and the overhead by 15 per cent except for Health, Education and Defence.

Earlier, Obaigbena said that the association had applied for the N10 billion intervention fund but the process for accessing the facility is still difficult.

He called for increase in advertising budget across all platforms of government to better inform the people and disseminate critical information.

Obaigbena said the government should take cue from Australia, where the government of that country intervened in ensuring that Facebook, Twitter and other social media platforms pay for Coronavirus contents by their media.

Speaking in the same vein, the Publisher of the Vanguard Newspaper, Sam Amuka said the support of the government was critical to the survival of the industry.

The 85-year old veteran journalist said despite the effects of the pandemic on the industry, the media has been playing its statutory roles.

Mr Wale Edun of “The Nation” Newspaper said the media is key in the COVID-19 era, particularly at the current stage of easing the lockdown when communication on safety guideline is critical.

Edun underscored the importance of the N10 billion intervention fund, tax relief and the need for a blanket compensation across the media to restore lives and livelihood.

The Chairman of the Board of “Punch” Newspaper, Mrs Angela Emuwa  said the industry has been badly hit by the pandemic because there were no advertisement out there.

She said the support of government to the media in terms of incentive would help the industry in doing its work of information dissemination.

Mr Gbenga Adegbaye also of the “Vanguard” said that the support the association is seeking should be without compromising its statutory watchdog functions but to build a virile media.

Similarly, the President of the Guild of Editors, Mustapha Isah said supporting the media would help to save jobs while a female participant at the meeting said government assistant should not be limited to the traditional media, online and new media should also be considered.