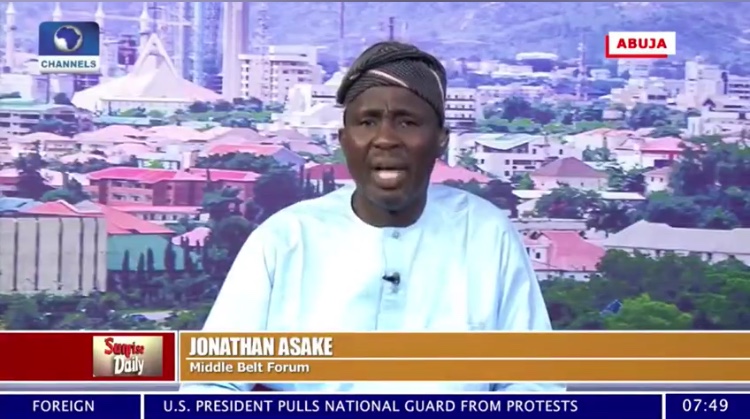 A former member of the House of Representatives and member of the Middle Belt Forum, Jonathan Asake, on Monday, June 8, 2020, caused a stir on Channels Tv when he accused the media of attempting to change the narrative around the killings in southern Kaduna communities, warning that the attacks will not stop if the current narrative persists.

Asake was a guest on the Channels Tv programme Sunrise Daily which was monitored by NewsWireNGR.

Asked if he didn’t think he was setting up the rest of the country against a particular ethnic group by insisting on calling the groups of people allegedly responsible for the attacks in southern Kaduna by their ethnic identity, Jonathan said: “When I mention Fulani herdsmen, I’m not the only one mentioning it.

“And I have all the reasons to mention Fulani herdsmen.

“But what the media would want is that Nigerians stop saying where the problem is coming from.

“If it is coming from a particular ethnic group, we call them by their name, we cannot call them any other name.

At this point the presenter tried to interject, reminding Asake that not all members of the Fulani ethnic group are criminals.

Asake retorted by saying “Have you seen any Yoruba people going around the country killing and everybody is complaining?

“Have you seen any Tiv people, or Efik, or Idoma people or Igbo people going around the country and everybody is complaining about them?

“So why can’t we mention them?

Asake at this point conceded that not all Fulani’s were responsible for the attacks but insisted that refusal to identify the terrorists by their ethnicity dilutes the narrative and enables their actions.

“Indeed there are criminal Fulanis.

“In my own place, there are our own local Fulanis that are also victims of these terrorist attacks.

“Their wives are kidnapped and they collect ransom. There is a difference between criminality and terrorism.

“When you in the media decide to call this thing a farmers/herders clash every time, you actually are confusing the whole thing and it will not bring a solution on time.

“The Fulanis that have been killing in my community do not have cattle, they don’t rear cattle at the time they’re going to attack.

“They go to attack at night during the hours that everybody is asleep.

“And their attacks are not like the banditry we’re talking about. They go to kill and to maim and to destroy, displace and take over the community.” he said.

One of the Channels Tv presenters, Chamberlain Usoh, reminded Asake that the television station had invited him and thus shown respect for his views.

“When you say the media, we invited you in the first place to air your views, and that’s a mark of respect to your views and what you stand for.

“We respect peoples views, so when you say the media, it may send the wrong signal.

“We have the utmost respect to everyone and of course to the law”, Usoh said, ending the interview.

There have been a series of attacks in southern Kaduna in recent months. The latest was reported on June 6, 2020, where about 38 people were killed, including women and children.

Despite peace attempts and promises to bolster security in the region, Kaduna state continues to suffer at the hands of marauding herdsmen leading to unnecessary loss of lives and displacement of persons.

In Nigeria, Doctors strike would be total from next week “regardless of COVID-19 pandemic”

Breaking: Governor Ikpeazu of Abia tests positive for COVID-19, hands over to deputy