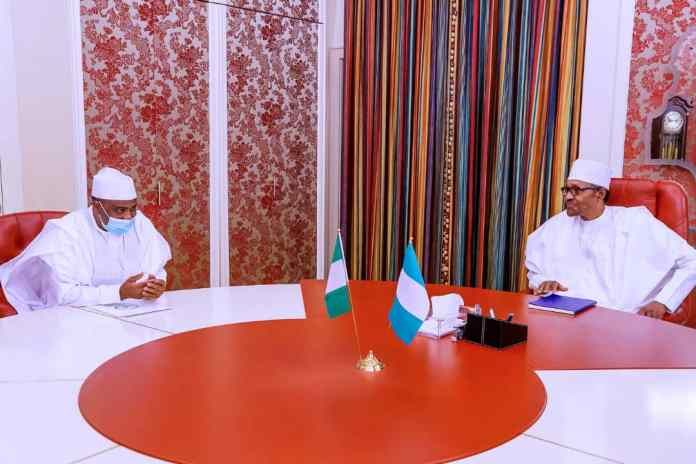 The Sokoto State Governor, Aminu Tambuwal has called for more military intervention to check the activities of bandits in the state.

The Governor made the call on Friday when he briefed President Muhammadu Buhari on the security situation in the state and the banditry attack in the Birnin Gwari Council of the state that claimed 74 lives.

Tambuwal told State House correspondents after his meeting with President Buhari at the Presidential Villa, Abuja, that the attack on Birnin Gwari, which is in the Sokoto East Senatorial zone of the state, was “a very, very heinous and dastardly act of aggression from the bandits.”

According to him, his meeting with the president dwelt on the needs and support that the state government would require to tackle the security challenge in the area.

“I have briefed the president on the general situation and the needs and the support that we require.

“And when I say we I mean the security personnel that are there in Sokoto state, working day and night in synergy with each other to ensure that they maintain peace and order in the state.

“And of course the requirement of that of more personnel, more equipment, more resources in terms of operation, vehicles and all of that and the need for the president’s intervention and support for internally displaced persons who are in thousands from that area” he said.

Restoration of Peace
Governor Tambuwal said that President Buhari reassured the people of the Sokoto State that he would immediately step into the matter and give directive for the restoration of peace in the state.

He said that the president reaffirmed his earlier statement that immediate actions would be taken on the issue and added that he was “satisfied with the response I got from the president.”

Tambuwal said that the attacks from the bandits were in the areas of the state bordering Zamfara and Katsina States and parts of Niger Republic, which have come been under attacks for some years.

“Sometimes it stretches into Sokoto from either Zamfara, Katsina sites or then some of them from Niger Republic.

“So, that is why the area became prone to these attacks. From the initial information that we have, the pressure that they are on from the coordinated efforts in Katsina and Zamfara is what is actually giving them some kind of advantage.

“Otherwise, if you block this side, they will escape to the other side.  So, there is the need for all of it to be coordinated between Niger,   Sokoto, Kebbi, Zamfara, Katsina, Kaduna, all of that area.”

Governors’ Synergy
According to Tambuwal there has been a synergy between the governors of the states in the north western part of Nigeria in the fight against the bandits.

“That is eight governors now on issues concerning security and the last one we had was in February in Kaduna before the lockdown.

“We are still talking to ourselves.  There is synergy among us; we have been working together.

“We share intelligence and even the security operatives in our state are working together.

“We are coming up with frameworks of engagements and containment and long term solutions to all of these problems together.  We are working together, I assure you.”

Governor Tambuwal said that the efforts being made to tackle the challenges security challenges in the state have yielded positive results, pointing out that the areas where it started have become calm.

“I cannot say that there is no positive result because before the attacks became intensified in Sabo Birnin LG of the state, there were some other local governments that have had earlier attacks that are now relatively calmer.

“When you talk about Kebbe Local Government, it is calmer now.  Some parts of Dange Shuni LG is also calm, Tureta is calm; they used to have these sporadic attacks, kidnappings, but they are calmer now.

“So, the concentration now is more on the eastern flanks, it is not as if we have not recorded any successes in the past.

“But then as I said the intensity of these attacks in recent time is due to this pressure in Katsina, Zamfara and all of that.”

Coronavirus Cases
Tambuwal said that Sokoto State was winning the war against the COVID-19 pandemic and has discharged over 90 persons who tested positive for the virus.

“In Sokoto State, we recorded 116 cases of corona virus, and out of that 14 mortalities. As we speak now, we have only eight of those affected in our isolation centres, which means that we have discharged over 90 people who have recovered from corona virus in Sokoto State.

“By the grace of God we are winning the war in Sokoto State.  It is clear that we are working hard; the task force is doing very well; the medical team in the state is doing very well and the public response to mobilisation and awareness is paying off.”

Reforming Almajiri
According to Governor Tambuwal, Sokoto State was working towards a model, which would integrate Almajiri schools with western education.

“Even before the current dispensation, I mean the democratic dispensation from 1999 till date, right the way back to the 1960s, the JNI used to have Islamiyya schools whereby Islamic knowledge and western education were being taught side by side.

“That was a very good model, especially to encourage children from parentage that have some concerns about western education. It is still a good model.

“It is being practiced in places like Indonesia, in Malaysia.  I led a delegation to go and under study the Indonesian model, which we are perfecting in Sokoto state to adopt so that we can bring all of these Almajiri to have side-by-side the Islamic knowledge and western education.

“We still have schools in Sokoto State that are teaching and their syllabus is combined. Parents are sending their wards to those schools,” the Governor explained.

He said Sokoto State would ensure that it develops an alternative that that would accommodate children in the Almairi schools before it would be completely abolished.