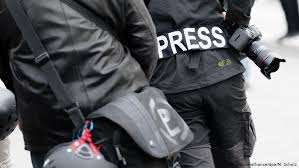 The primacy of the media in any society is indubitable. The media is the iron curtain between tyranny and democracy. It is the bastion of the ethos, truth and spirit of a people. And it serves no interest but the public’s.

Cliched as the fourth estate of the realm, the essentiality of media is commonplace but prodigiously unemphasised. In fact, it is the institution that is accorded a ‘’special envoy status’’ in the Nigerian constitution, and even in those of some advanced democracies.

Section 22 of the Nigerian constitution says: “The press, radio, television and other agencies of mass media shall at all times be free to uphold the fundamental objectives …and uphold the responsibility and accountability of the government to the people….”

So, naturally, the media exists in the service of public interest – to hold the government to account. It is a public institution beholden to no one. Considering, the preeminent place of the media in Nigeria, should it be allowed to flounder and decay under financial constraints?

Who will come to its rescue, the people or the government?

As a matter of fact, before the COVID-19 tsunami and its attendant economic perils, most newspapers or rather, news organisations were struggling to stay afloat. Salaries and allowances of staff were privileges rather than entitlements in some media organisations. COVID-19 has worsened the situation.

Media organisations which had kept their terms of contract with workers cannot afford to keep paying staff salaries anymore. There have been forced leave, salary cuts, sackings, and other Siberian measures in the industry.

Who will come to the rescue of the Nigerian media?

I read the note by Dapo Olorunyomi, publisher of Premium Times, where he said: “Emerging from a recent legacy of perhaps the hardest hit industry by the economic downturn further complicated by the COVID-19 crisis, the media in Nigeria today face a truly existential threat of an unimaginable proportion’’, and solicited donations from readers through community membership.

I consider this as noble, and the righteous thing any independent news organisation will do. But we are all made vulnerable by COVID-19. The Nigerian reading population is not insulated from the economic menace of this disease. So, how far can the media industry go with this approach?

Let me emphasise this, the independence of the media is crucial, and the institution should be not be bankrolled by any interest. But how independent can a news organisation experiencing severe financial denudation be?

Even media organisations subsisting on grants are not entirely free of influences – the grantors give conditions for these grants — conditions which look innocuous and reformist on the surface but purposive on the agenda of the home country of the grantors.

Again, I know bailout for the media is a question of ethics or ethical appearances. The question is, can you still hold to account a government you received a financial bailout from? Will there be a conflict of interest? But really, most media organisations including the ‘’independent’’ ones survive on adverts mostly from government institutions. And this does not corrode their independence to say the least.

Also, bailout funds are not resources of some people in power, but of the Nigerian people, and they should be deployed to keep the media, as a public institution of great consequence, oxygenated.

In April, the federal government of Australia announced a $50 million bailout for the regional media financially wizened by the COVID-19 pandemic. The decision of the government was celebrated by industry experts in the country.

In Canada in May 2019, the government mulled bailing out the parlous media industry with $600 million – long before COVID-19. And with the pandemic, most Canadians support a bailout for the media, according to a survey conducted by Nanos Research for Friends of Canadian Broadcasting, a non-partisan media watchdog.

It is a matter of survival here; survival of the most important public institution in any society. Taxpayers’ funds are often deployed dubiously in feeding and bracing banks in times of financial stress, I believe they should be put to where it matters most now.

Nigerians should bail out the media.