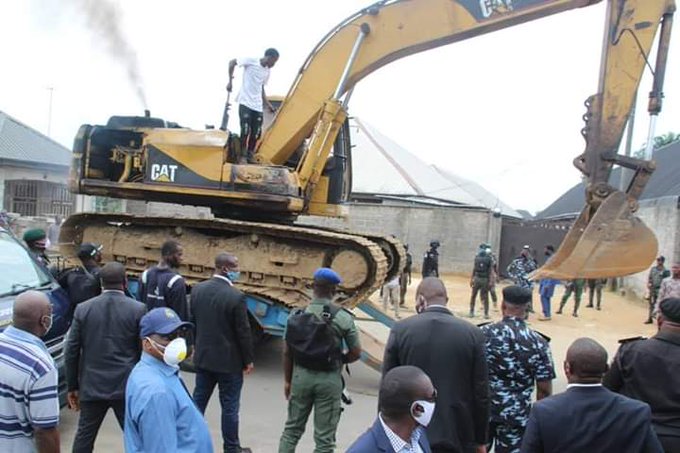 The Peoples Democratic Party, PDP, National Publicity Secretary, Kola Ologbondiyan believes that Rivers State governor Nyesom Wike’s demolition of Prudent Hotel, Eleme and Etemete hotel in Onne are justified in the context of the “fight” against COVID-19. Many observers share his opinion because the perception is that whoever does anything to compromise the government’s attempts to fight the coronavirus deserve whatever happens to them.

Putting aside the slippery slope that such one track minded reasoning enables however, an examination of the executive order issued by Governor Wike prior to the lockdown reveals that at no point was summary demolition of structures listed as a penalty for flouting the rules of the lockdown. This is very important for a number of reasons that will be addressed below.

Executive Order Made no Mention of Demolition: Why This is Important

To start with, here is the full and unredacted text of the executive order in question.

As Part 8 (x) (e) in the above address shows, the Rivers State governor’s executive order did not in fact stipulate demolition as a penalty for a hotel that remained open in contravention of the lockdown order. The stipulated penalty was confiscation and auction of the premises. This is significant for two reasons.

First, it suggests that Governor Nyesom Wike is a loose cannon who is making it up as he goes along, acting out his Action Man fantasies without bothering to establish even the most tenuous basis for his actions. The COVID-19 emergency could present him with a golden opportunity to continue acting without reference to people’s human rights or their constitutionally guaranteed freedoms, under the guise of “leading the fight” against the coronavirus.

Second, it raises the question of exactly what powers a governor in Nigeria has access to, if what appears to be a clear and incontrovertible violation of constitutionally enshrined human and property rights can be carried out in such wanton and brazen fashion based on nothing more than his say-so. It is common knowledge that the problematic Land Use Act 1979 vests all land in the state governor, but it is generally accepted that this power only applies to issues surrounding ownership, registration and urban planning.

If as we have now seen in Rivers, a hotel that is legally owned by an individual and has not breached any planning regulations, can be demolished at the personal whim of a power drunk, out-of-control governor, it raises the possibility of the governor using this newly assumed power after the COVID-19 fight to oppress and persecute his political opponents in the state.

If nothing more than the fickle emotions of the governor are all that is needed to destroy investments without any legal process whatsoever, does that mean that the likes of Rotimi Amaechi and Tonye Cole can expect to have their properties in Port Harcourt levelled to the ground whenever Governor Wike wakes up on the wrong side of his bed? If another party comes in power in Rivers State in 2023, has this established a precedent for wanton destruction of property that can be used to settle political scores?

“We strongly condemn the demolition of Prodest Hotel in Rivers State. COVID-19 response does not translate to abuse of power.” Mr Ojukwu added.

In condemning the actions of the Governor of Rivers State, Political Activist, Ndi Kato also added, – “Nyesom Wike is at this point, in a huge competition with Corona Virus to see who can ruin the lives of the people of Rivers State faster. This is not leadership. This is irrational brutality and dictatorship hiding under the cover of COVID-19 enforcement.”