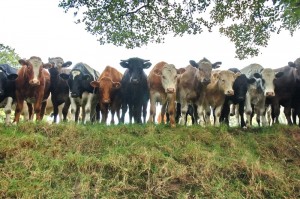 Rivers State Governor, Nyesom Wike, has impounded two trailers loaded with cows and heading for Port Harcourt, the state capital, despite the 24-hour lockdown to check the Coronavirus pandemic in the capital city.

The governor according to a statement signed by his Special Assistant on Electronic Media, Simeon Nwakaudu, also arrested 14 persons in the two trailers conveying the cattle from Adamawa State to Port Harcourt.

The governor said that the cows and the trailers would be auctioned explaining that a tip-off from some persons led to the arrest.

Noting that the defaulters were arrested at Rumuigbo in Obio/Akpor Local Government Area, the governor ordered the prosecution of the 14 persons by the Mobile Court constituted by his administration under the Executive Order Six he signed for the declaration of the lockdown.

He also directed the State Ministry of Health to conduct tests on the 14 persons to ascertain their coronavirus status.

He said: “This fight has nothing to do with individuals. The law must take its course. You are aware of what is happening and then some people want to illegally smuggle persons into the state. The Port Harcourt and Obio/Akpor are under lockdown and the law must be obeyed. The trailers and the cows will be auctioned tomorrow. ”

Wike said that the arrest of the trailers vindicated his earlier position that security agencies were collecting money at the borders to allow people into the state.

He said: “You heard them saying that they gave money to the security agencies before they were allowed to cross the border. The owner of the cattle in the phone interview said they have fallen short of the law”.

Wike said that people must be alive to eat cow, hence the lockdown to protect the lives of Rivers people.

He decried the level of desperation to smuggle people into Rivers State, but said the government would remain vigilant despite the challenges.

The governor also charged the Rivers State COVID-19 Local Governments Task Force to identify hotels still operating during the lockdown to enable the government demolish them.

He said: “From tomorrow, move in. Any hotel that is operating , identify it and we will bring down the hotels. I have the political will. Those people who disobey, will face the consequences.”

Wike said that the Task-force must be decisive to ensure that coronavirus was not accommodated in Rivers State.

He said: “Nobody should come from outside to compound our problems. Then you want to import this invisible killer. We will not that.

“If we allow what is happening to continue, we don’t have the capacity to face it. And there will be no support from any Quarter,” he said.

He charged the operatives of the taskforce to see their appointment as an opportunity to defend the state saying that members of the outfit would be on government payroll.