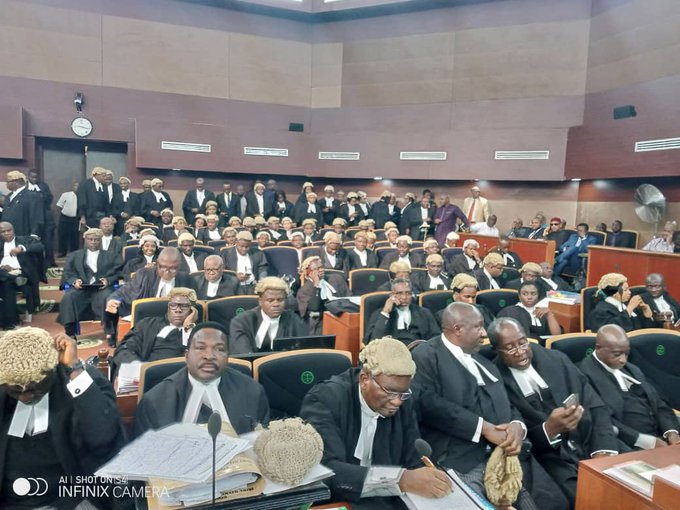 Nigerian lawyers are asking President Muhammadu Buhari to reject 33 candidates recommended to him by the National Judicial Council (NJC) for appointment as High Court judges of the Federal Capital Territory.

The group, Open Bar Initiative, in a petition to Mr Buhari said 17 of the NJC’s nominees were only able to make the NJC’s list because of their “family affiliation” .

According to the petition dated May 6, 2020, and jointly signed by Silas Onu and Chidi Odinkalu, the conveners of the Open Bar Initiative and five other members of the group.

The Open Bar Initiative, a group of Nigerian lawyers, says it is dedicated to defending the integrity of the legal profession in the country.

The group said in a press statement that it has forwarded the petition to the Senate President, Ahmed Lawan, and the Speaker of the House of Representatives, Femi Gbajabiamila.

Among the nominees said to be unqualified for appointment as a judge in the petition is Hafsat Abba-Aliyu, 42, the daughter of Justice Uwani Abba-Aji of the Nigerian Supreme Court.

Another is Njideka Nwosu-Iheme, 36, the daughter of Justice Mary Odili of the Supreme Court.

There is also Fatima Abubakar Aliyu, 35, said to be the daughter of the immediate past president of the Court of Appeal, Justice Bulkachuwa. And Mimi Katsina-Alu, 46, the daughter of late Justice Katsina-Alu, a former Chief Justice of Nigeria, and Ibrahim Mohammed, 40, the son of a former grand-khadi of the FCT.

There is also Nwabulu Chineze, 57, said to be a sister to the presiding Justice of the Court of Appeal, Akure, and Enenche Eleojo, 46, a personal assistant to the chief judge of the FCT High Court.

There is one that is outstandingly interesting. Olufola Olufolashade, according to the petition, was not even among the shortlisted candidates. The name was said to have been “smuggled” into the list by an unnamed top Supreme Court justice.

The petition said the selection process violated the NJC’s laid down rules and procedures and the High Court of the FCT (number of judges) Act, 2003.

It said “the selection process is fraught with judicial insider dealing which risk turning the judiciary into an instrument for advancing personal interest and patronage”.

The Open Bar Initiative said in its press statement, “The suggestion that judicial service in Nigeria is an inheritance transmitted from parents to children is not supported by the Constitution or any other instrument under the Nigerian laws.”

It said the NJC’s selection process was manifestly an abuse of the high constitutional responsibility invested in those who must nominate judges for appointment.

The result of this abuse, the group further said, is that good candidates have been arbitrarily excluded from consideration in favour of unqualified candidates whose only claim to the job is the name or the job of their parents, husbands, uncles or other judicial insiders.

“These are not just unqualified nominees; they are bad nominees because only bad people will want to become judges through smuggling,” said Mr Odinkalu. “They will make bad judges. We should resist them and their sponsors.”

Below is the full list of 33 persons recommended by the NJC to President Buhari for appointment as judges of the FCT.

Related Topics:NigeriaNigerian Judges
Up Next