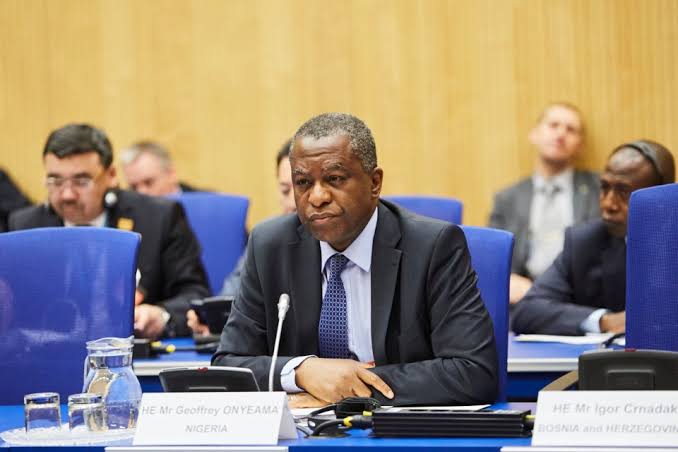 Nigerians resident in Guangzhou, Guangdong Province of China, will soon be evacuated after investigation confirmed that they are being maltreated.

The minister, while briefing the media, said that the decision became necessary “following new revelations over the situation after speaking to the Nigerian officials in Guangzhou”.

“Quite a number of Nigerians in the region indicated interest to return to Nigeria. We are putting in place, as quickly as possible, the mechanisms of bringing them home. That is the immediate solution to their plight.”

The Minister explained that following the new revelations, he summoned the Chinese Ambassador to Nigeria, Dr Zhou Pingjian, for the second time, and expressed Nigeria’s displeasure over the situation.

Onyeama explained that after the government’s earlier position on the matter, it showed that the issue was more than what the government thought it was.

He said that Nigeria’s Ambassador to China, Amb. Baba Jidda, as well as other African Ambassadors in China, met with the Chinese Foreign Ministry and expressed their concern.

The minister explained that the African Ambassadors made a number of demands from the Chinese Government, insisting on the respect of the rights and dignity of Africans and Nigerians in Guangdong.

Onyeama said that the Chinese government was committed to looking into the matter to ensure  that no Nigerian or African in Guangdong Province or anywhere in China was maltreated.

“After we had made a statement in the media, I continued to receive information from Nigerians in China and I engaged directly with our officials in Guangzhou, Guangdong Province and people who were right on the ground.

“I must say that contrary to what we had believed that the situation was fully under control and that there were no longer issues, it became apparent that there were still very distressing incidences.

“We found that it was almost as if it was an institutional attack on the rights and dignity of Nigerians and Africans there.

“So, as I said, with confirmation from people who were there, I again, invited today, the Chinese Ambassador and presented these facts to him.

“I said look, contrary to what was agreed, contrary to the promises that had been made and guarantees given, the situation does not seem to have ameliorated and this is totally unacceptable.

“I told him that we have stories of Nigerians who had been evicted from their residences, who were unable to get back into hotels where they had gone to be isolated.

“I also told him that Nigerians are not being served when they go to restaurants and to shopping malls and so forth. I told him that such was totally unacceptable and something needed to be done,” Onyeama said.

He said that even though the narratives, even among African in the area were conflicting, there was clearly the main narrative of unacceptable treatment of Nigerians and other Africans in Guangzhou, Guangdong Province.

While noting that there was an effort to contain an outbreak of COVID-19, including some Africans who just came into the country testing positive, there was no reason to trespass on the rights and dignity of Nigerian.

Related Topics:ChinaGeoffrey Onyeama
Up Next