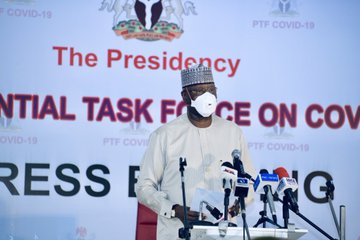 When John Ahmadu (name has been changed) received a letter from the National Insurance Commission (NAICOM) on the 3rd of April, he assumed it would be a run-of-the-mill advisory memo from his industry regulator. As the director of a small insurance company that will remain anonymous for the purpose of this report, John was already facing the double jeopardy of a recent business slump and low future business volumes due to the COVID-19 outbreak. The last thing he needed was more trouble on his plate, but that is exactly what the letter brought.

It was not so much the fact that NAICOM wanted a donation from his company to aid the federal government’s COVID-19 relief fund that was the problem. The issue was that the wording of the letter suggests that this was neither a request nor was it negotiable. Instead of making an open threat; this letter used the language of regulatory passive aggression to say “Pay up, or else.”

“Your Donation is Expected at a Minimum of N10 Million”

The letter, which was made available to NewsWireNGR reads in part,

“To this end and flowing from engagement with leaders in our industry, it has been resolved that the sum of N500 million be mobilized toward the initiative. The mobilisation of the fund, which will be the industry’s contribution to tame the pandemic, is being coordinated by the commission.

It has therefore become imperative that you support this initiative by donating generously to the fund. I am by this letter requesting your kind support and generous donation to the fund.

The donation from your company which is expected at a minimum of N10 million should please be paid into the Nigerian Insurers Association First Bank Account Number 2000917791.”

The implications of this letter are massive. Apart from the obvious ethical question of whether “donations” obtained using what looks like strong arming tactics can actually be termed as such, there is the question of motive and who benefits.

According to John, his company is a tiny player compared to the industry giants, and in fact it has barely done N1 million in revenues this year. This “donation” he says, would effectively kill the company as a going concern. In other words, the government’s response is possibly going to end up worse than the pandemic itself.

Speaking to NewsWireNGR about the implications of this to the company, John says: “The company is practically comatose. The economic implications of this thing [CVOID-19] to companies will be so hard hitting that they shouldn’t be dealing with this kind of government bullying. This company has just come out of a financial ICU and can barely afford to cover overhead costs and staff salaries. We are now being arm-twisted into parting with a minimum of N10 million.”

NewsWireNGR reached out to NAICOM by email and phone, but the commission was yet to respond with its comment at press time.

How Far Does this Go?

As mentioned earlier, this letter calls into question the validity of the entire COVID-19 corporate fundraising effort in Nigeria. Many are familiar with the list of individuals and organisations that had pledged over N15 billion as at April 1.

Nigerians have been given the impression that corporate bodies have come together and volunteered huge sums of money of their own volition to support the government’s effort. Meanwhile in at least one proven instance here, said funds are clearly being extracted under duress. Is the government in fact shaking down the private sector to prop up its own image for political purposes?

Several bank employees who spoke to NewsWireNGR on the condition of anonymity have confirmed that their wages have been slashed in response to the epidemic, which would seem to make no sense when juxtaposed against the “donations” made by these institutions.

Clearly paying staff their full wages in an industry that is one of Nigeria’s largest employers of labour would be more impactful in fighting against COVID-19 than donating to the famously opaque and unaccountable Nigerian government.

Have the banks and individuals on this list been bullied by the government into making these purportedly voluntary donations?

At press time, despite several anecdotal accounts to the affirmative, NewsWireNGR has been unable to authoritatively confirm that letters like this were sent to banks and other institutions. We will bring updates as the story develops.

In the meantime, John and his barely-surviving small business now have the impossible task of coughing out N10 million at short notice while also bracing to survive the impact of the expected economic recession that will follow the pandemic. Summing up his position on the situation, John says:

“This is clearly a system corruption”.

To better understand the potential future impact of the COVID-19 pandemic on Nigerian businesses when they resume normal operations, NewsWireNGR spoke with SBM Intelligence analyst, Ms Rosemary Enemuo, who provided her expert opinion on how the rest of the year will play out.

Enemuo further went on to break down her predictions for Nigerian businesses in the remaining three quarters of 2020:

Monetary and Fiscal Policy: Government at this time needs to reduce interest rate for small and medium size businesses. This will help manage inflation and increase inflow of money. In the next 4-6 months FAAC allocation will continue to experience a downward trend just as it is already occurring, this means that federal allocation to states will reduce, therefore local economies who depend on salary payment should open doors for investors.

Bankruptcy: Some banks may experience bankruptcy, this is because fixed deposit rate will reduce and banks will take some time before they can invest in local businesses again or collaborate with local market to increase wealth creation.”