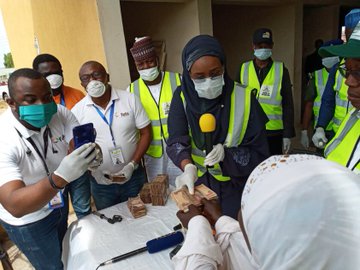 The Federal Government has commenced payment of N20, 000 each to five thousand beneficiaries of its Conditional Cash Transfer (CCT) programme in the Federal Capital Territory (FCT).

Hajiya Sadiya Umar Farouq, the Minister of Humanitarian Affairs, Disaster Management and Social Development, disclosed this on Wednesday at Kwali Area Council in the FCT.

Farouq said the payment was in line with the directives by President Muhammadu Buhari. Buhari in a nationwide broadcast on Monday, announced the payment as a measure to cushion the effect of the lockdown of Lagos and Ogun States as well as the FCT on the poor and vulnerable households.

“As we know, the CCT is for poor and vulnerable households in the country. “Beneficiaries are entitled to N5, 000 every month; however, the payment of N20, 000 now to each beneficiary is for four mouths. Loading..

“It is going to happen all over the country, but we are starting with FCT, Lagos and Ogun. These are the frontline states. Other states will follow.

“With the current pandemic and circumstances on ground, this amount will go a long way to support the families in their daily lives. “Today, we are giving out N20, 000 each to about 190 beneficiaries in Kwali Area Councils. The total beneficiaries in FCT are 5, 000,’’ Farouq said.

The minister further said that the beneficiaries were chosen without any form of bias, adding that political party affiliation was never a criterion for selection of beneficiaries. One of the beneficiaries, Mrs Serah Gadaga, a mother of two, said she was happy about the payment.

“The payment for January, February, March and April together which amounts to N20, 000, will help in boosting my petty business, settling children school fees and meeting up other needs of the family. “May God give the Federal Government the resources to sustain and continue this programme to help the poor people in the country,’’ Gadaga said.