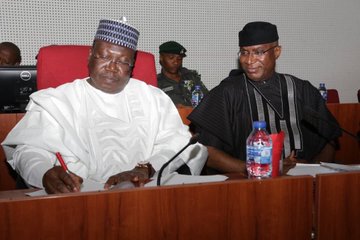 President of the Senate, Senator Ahmad Lawan says Nigeria is ranked 131 globally on the ease of doing business.

In a statement issued on Sunday by his Special Assistant (Media), Lawan said the Senate has commenced moves to strengthen the country’s economy.

Senator Lawan said the upper chamber will on Tuesday meet to consider a critical bill which specifically seeks to amend the Companies and Allied Matters Act (CAMA) in a bid to boost the business sector in Nigeria.

“Presently, we are one hundred and thirty-one in the ranking of doing business in the world. If we pass the CAMA bill, and the President signs, we will move to be within the first 100. That means we will jump over thirty positions to be a better country in the ease of doing business.

“So, it is a very important bill for all of us. Of course, in the last Senate, all the processes were conducted on this bill, so there will be no need for us to waste too much time on it,” he said.

The move follows a proposal by the Senate Leader, Senator Yahaya Abdullahi (APC – Kebbi North), to amend the Companies and Allied Matters Act (Chapter C20) Laws of the Federation of Nigeria (2004).

The law, which has not been significantly amended in the last 28 years, was enacted in Nigeria as a decree of the military government in 1990.

The Bill also seeks to provide an efficient means of regulating businesses, minimize the compliance burden of small and medium enterprises (SMEs), enhance transparency and shareholder engagement, and promote a friendly business climate in Nigeria.