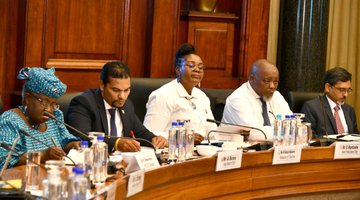 Ngozi Okonjo-Iweala, Nigeria’s former minister of finance, was at South Africa’s presidential economic advisory council meeting in Tshwane on Friday – the meeting holds shortly after the country’s economy shrank by 1.4% in the fourth quarter of 2019, according to new Gross Domestic Product numbers.

Ngozi Okonjo-Iweala is a Nigerian-born economist and international development expert. She sits on the Boards of Standard Chartered Bank, Twitter, Global Alliance for Vaccines and Immunization (GAVI), and the African Risk Capacity (ARC).

Previously, Okonjo-Iweala spent a 25-year career at the World Bank as a development economist, scaling the ranks to the Number 2 position of Managing Director, Operations (2007-2011). She also served two terms as Finance Minister of Nigeria (2003-2006, 2011-2015) under the leadership of President Olusegun Obasanjo and President Goodluck Jonathan respectively.

“With President Ramaphosa, members of cabinet, and members of the Presidential Economic Advisory Council in Pretoria discussing sources of growth for the South African economy and win-win economic interactions with the continent,” Okonjo-Iweala tweeted.

The South African economy shrank by 1.4% in the fourth quarter of 2019, according to new Gross Domestic Product numbers, released by Statistics SA on Tuesday.

This followed a contraction of 0.8% in the third quarter, which means that the economy was in recession for the last half of 2019. South Africa last entered a recession – when the GDP falls for two consecutive quarters – in the second quarter of 2018. This is South Africa’s third recession since 1994.

The South African presidency, the council will advise the president and the government in facilitating the development and implementation of economic policies that spur inclusive growth.

It will also serve as a forum for in-depth discussions on emerging global and domestic developments, economic and development policies.

The fourth-quarter decline is larger than economists had predicted, as the economy battles the fallout of load shedding.

Seven out of 10 industries contracted in the fourth quarter, with agriculture (-7.6%) taking the biggest hit.