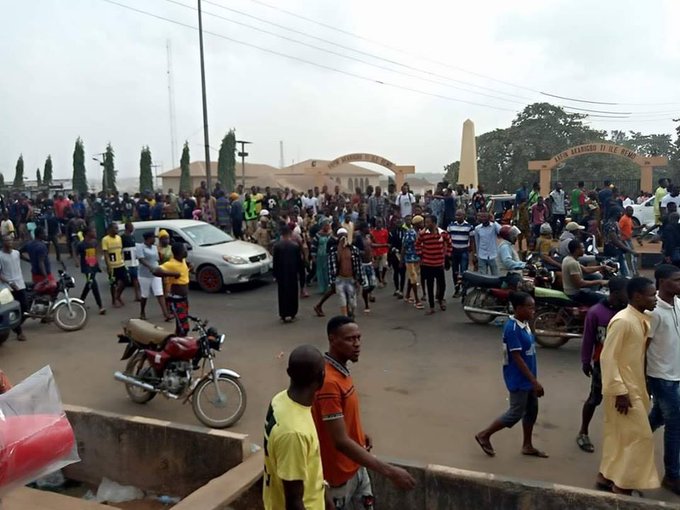 At least three persons have been confirmed killed in Sagamu, Ogun State, as angry young men and women took to the streets to protest the killing of a footballer named Tiyamiyu Kazeem by operatives of Special Anti-Robbery Squad.

Saharareporters reports that Kazeem was said to have been pushed from a SARS van on motion and onto a speeding car that eventually killed him on Saturday after officers of the agency wrongly accused him of being an Internet fraudster (Yahoo boy).

Angered by the situation, youths marched round Sagamu on Monday and even took on police personnel within sight to register their frustration.

In the process, three persons were hit by live bullets fired by policemen to disperse the crowd.

In retaliation, the young men and women pelted the law enforcement officials with stones.

A resident of the town named Kehinde Adekoya, who spoke with our correspondent over the phone on Monday, confirmed that he had seen three bodies across various parts of Sagamu following the violence, adding that the entire place was “boiling”.

He said, “I can tell you that at least three persons have been killed, I saw their bodies with my eyes. The entire place is boiling now. We don’t want SARS anymore in Sagamu.”

South East is better secured than any other region in Nigeria – Ebonyi Governor, David Umahi

Court strikes out charges against Ekweremadu over non-declaration of assets