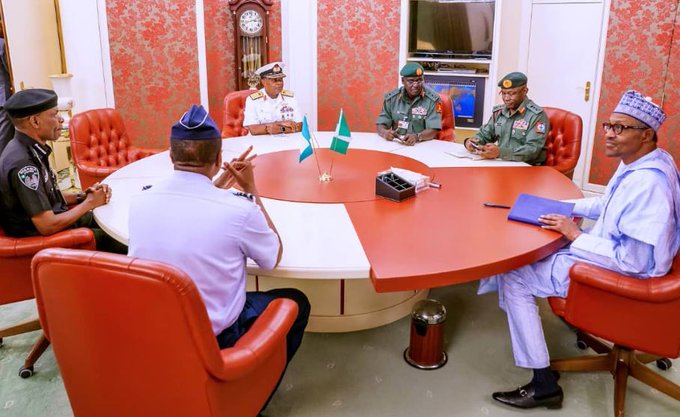 The National Security Adviser, Major General Babagana Monguno (retd.), was not in attendance as President Muhammadu Buhari meet with Nigeria’s service chiefs on Monday at the Presidential Villa, Abuja.

Last week, In the letter that went viral online, the National Security Adviser (NSA) Babagana Monguno warns the president’s ‘all powerful’ Chief of Staff (CoS), Abba Kyari against meddling in security affairs in the presidency.

He also warned the nation’s service chiefs to stop taking orders from Kyari and to be wary of his interference. The letter, addressed to the service chiefs and copied to the president and ministers for foreign affairs, defence, interior, police affairs and Kyari himself, is dated December 2019.

Daily Trust reports that those in attendance were the; Chief of Defence Staff, General Gabriel Olonisakin; Chief of Army Staff, Lt. – Gen Tukur Buratai; Chief of Air Staff, Air Marshall Sadique Abubakar; the Chief of Naval Staff, Vice Admiral Ibok Ekwe Ibas and the Inspector-General of Police, Mr Mohammed Adamu. Though it was a closed-door meeting, it is believed that discussion centred on security challenges in the country. Buhari and the service chiefs hold routine security meetings weekly but that of today is tagged ‘special consultation’.

Pressure had been mounted on Buhari lately to fire the service chiefs amid escalating security challenges in the country. The National Assembly too had called for the sacking of the security chiefs. Recall that Monguno had, last week, alleged that undue interference by President Buhari’s Chief of Staff, Abba Kyari, on matters of national security had slowed down meaningful gains that Buhari had sought to achieve. In a leaked memo to the service chiefs, which was published by an online platform, Premium Times, Monguno directed them (service chiefs) to desist from taking further directives from Kyari. Security experts and political analysts who spoke to Daily Trust described the development as unhealthy and dangerous for the country. According to Monguno, in the memo, Kyari’s directives to service chiefs were sometimes issued without the knowledge or approval of the president, a practice he said had added to the government’s failure to contain insecurity.

“Chief of Staff to the president is not a presiding head of security, neither is he sworn to an oath of defending the country. “As such, unprofessional practices such as presiding over meetings with service chiefs and heads of security organisations as well as ambassadors and high commissioners to the exclusion of the NSA and/or supervising ministers are a violation of the Constitution and directly undermine the authority of Mr President. “Such acts and continued meddlesomeness by chief of staff have not only ruptured our security and defence efforts, but have slowed down any meaningful gain that Mr. President has sought to achieve,” Monguno said in the memo dated December 9, 2019.

Miyetti Allah seeks inclusion of its members in operation Amotekun

South East is better secured than any other region in Nigeria – Ebonyi Governor, David Umahi