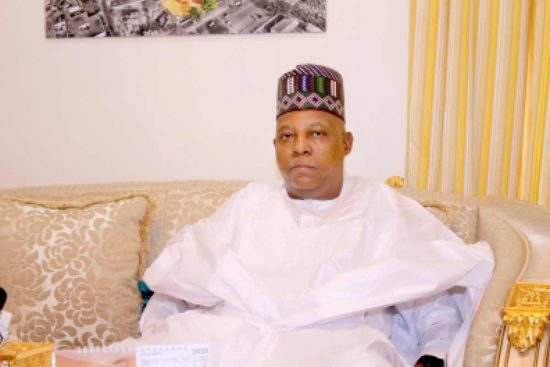 The lawmaker representing Borno Central in the Senate, Kashim Shettima, has said that President Muhammadu Buhari came ahead of his time and he has done well in stabilising the Nigerian economy.

Senator Kashim represents Borno Central in the Senate. He served as governor of Borno State between 2011 and 2019.

The former governor of Borno State disclosed this in an interview with Daily Trust Newspaper.

He argued that Nigerians should appreciate Buhari for bringing stability to the economy. “And one area that people are not willing to give it to Buhari is that the economy was in the lowest ebb before he assumed the mantle of leadership. The bare fact is he has brought stability to the economy. For the first time we have been having an expansionary budget, and deliberate efforts are being geared towards addressing our infrastructural deficit. I think he deserves better credit than we are willing to give him”

“And most importantly for those of us from the North East, there is nothing as dehumanising as poverty. And when you add insecurity to it, you compound the whole issues. To the people of the North East, poverty and insecurity are not issues of philosophical dispute but the reality of everyday life. And in the past 20 years of our democratic governance, nobody among the Nigerian presidents understood the peace development nexus better than President Muhammadu Buhari. By setting up the North East Development Commission (NEDC), I believe it will give a new lease of life to efforts at combating the challenges we are facing in the sub-region, and we hope and pray that with the calibre of management he has put in place, it will not go the way of NDDC,” he added.

When asked why he is against zoning, the former governor said;

“Not that there should be no zoning, but a Nigerian with a pan-Nigeria vision. A Nigerian with a national vision, not a Nigerian who hardly knows other parts of the country, or hardly goes beyond his own cocoon, he only sees himself as an Igboman, or is a Hausaman or is a Kanuriman before he is a Nigerian. This is because what binds us together exceeds whatever that divides us. And if this country is to implode, believe me, we are all going to pay a heavy price. So we either learn, to borrow the words of Nelson Mandela, or to borrow the words of Martin Luther King, we either learn to live as brothers or perish together as fools”.

He maintained that, “there can only be one leader at every point in time and believe me I am speaking to you from the bottom of my heart, where the leader hails from truly doesn’t matter. The Second Niger Bridge is being built under the stewardship of a Fulani man, not Azikiwe, Jonathan whom the Igbos were claiming to be their own. The East-West road is being pursued not under Jonathan but under a Fulani man who is being perceived as a Tutsi. The Lagos-Ibadan rail line, the major signature project of this country, apart from Mambilla, and the Kano-Kaduna rail project are largely in the South because the interest of the nation supersedes whatever primordial interest or biases we might have. So what we need is truly a Nigerian leader. At the appropriate time we will cross the bridge; whoever that emerges as our candidate, most certainly we will rally round that person.”