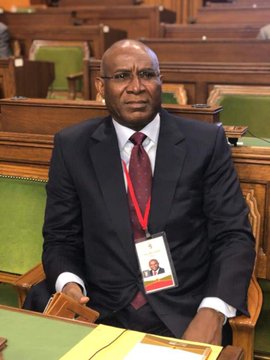 SaharaReporters is reporting a revelation on how Nigeria’s Deputy Senate President, Augustine Ovie Omo-Agege, was suspended from practicing law in California, United States, over a case of forgery and fraud.

The document revealed that Omo-Agege committed the offence in 1995, was found guilty and suspended from practicing for two years. He was also placed on probation and mandated to take a multistate professional responsibility examination before being admitted back to the US bar, according to the court document seen.

According to Saharareporters, “After being arrested, a four-count amended charge was filed against Omo-Agege in the Los Angeles County Superior Court with Case number BA111331. The charge sheet partly reads, “Count 1 of said amended information alleged that on or about March 7, 1992, in the County of Los Angeles, respondent committed the crime of forgery of check in violation of Penal Code section 470, a felony.

“The allegations continue that on or about the date referred to above, respondent signed the name of Elpert Defrietas to a check in the amount of $890 and attempted to pass said check as true and genuine knowing that said check was forged with the intent to defraud the Bank of America, Ahined Mahome and Elpert Defrietas. Count 2 of said amended information alleged that on or about March 7, 1993, in the County of Los Angeles, respondent committed the crime of perjury – application for driver’s license in violation of Penal Code section 118, a felony.  The allegations continue that on or about said date, respondent certified that he had never applied for a California driver license or identification card, when in fact he had applied for license and been issued under the name Augustine Omoagege.”

The court concluded that Omo-Agege was guilty of the charges and convicted him for forgery on November 30, 1995. On April 12, 1998, the Review Department of the State Bar Court issued an order suspending Omo-Agege from practicing law in California for two years effective May 30, 1996. After his conviction, the Delta State-born lawyer returned to Nigeria where he soon delved into politics.

To have a smooth sail, he removed Augustine from his name and adopted his middle name, Ovie, perhaps in order to avoid any sort of linkage to his criminal past in California.

Having served as a commissioner under the administration of former Delta State governor, James Ibori, who was jailed in the United Kingdom for stealing huge sums belonging to the state, Omo-Agege rose politically, emerging Deputy President of the Nigerian Senate on June 11, 2019 after defeating Ike Ekweremadu, who held the position at the time.

But before then on April 18, 2018, he was arrested by the police in Abuja for leading armed thugs to snatch and seize the mace of the Senate.

Yoruba’s are trying to use Amotekun to declare Oduduwa Republic away from Nigeria – Balarabe Musa’s comments Triggers Prof. Soyinka