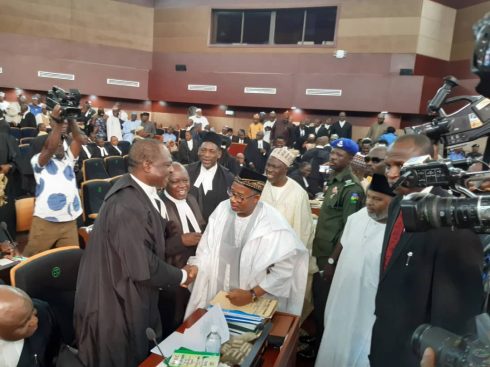 Bauchi State Governor, Senator Bala Abdulkadir Muhammed is among the dignitaries at the Supreme Court as the apex court gives verdict on the state’s March 9 governorship election. The governor was absent at the court’s sitting last week as he was hospitalised in London.

. A statement signed by Senior Special Assistant on Media to the Governor, Mukhtar Gidado said, “Some members of the opposition have in the wake of the on-going Supreme Court case, unfortunately insinuated that the governor is in the United Kingdom for the ‘long haul’ because of what they term to be his deteriorating health condition.

DailyTrust Newspaper reports that, at the last sitting of the court, the former governor of Bauchi State, Mohammed Abubakar, who stepped out the court raising his hands to signal ‘four plus four’, was pelted with water bottles by persons believed to be supporters of Bala Muhammed.

The former governor and his party, the All Progressives Congress, APC are challenging the declaration of Bala Muhammed as the elected governor of the state by the Independent National Electoral Commission, INEC.