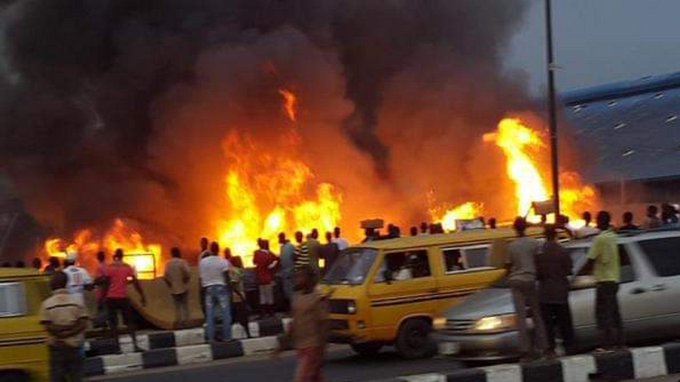 Multiple sources tell NewsWireNGR that theres been an explosion at the Abule Egba area of Lagos State Nigeria.

The Cause of the explosion is unknown but reports say there was pandemonium late Sunday evening when the pipeline said to be owned the Nigerian National Petroleum Corporation exploded in the Oke-Ode area of Abule-Egba, Lagos State.

The Abule Egba area is not new to activities of vandals who constantly rupture the pipeline in a bid to steal fuel but we will be updating this story as we get more updates about the cause of the fire and casualty – but properties worth millions of naira are said to have been consumed in the raging fire.

The Director-General, Lagos State Emergency Management Agency, Dr. Oluwafemi Okeosanyintolu, who confirmed the incident Punch Newspaper said, “There is a fire incident at Oke-Odo. We are already coordinating.”

Also, the Director-General, Lagos State Fire Service, Magret Adeseye, said three fire service station had been deployed in the area to curtail the fire incident, adding that no casualty had been recorded.

Related Topics:NNPCPipeline Explosion
Up Next