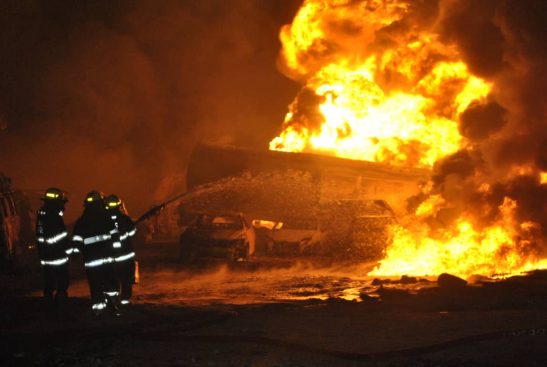 Several persons lost their lives and many others were burnt in a gas explosion at the Sabon Tasha area of Kaduna metropolis on Saturday.

The explosion occurred at about 1:00pm at a gas shop located by the main road opposite Total Filling station, at the ever busy Sabon Tasha.

Daily Trust Newspaper is reporting that A Professor of Physics and chairman of Nigeria Atomic Energy Commission is feared to be among the six people killed in a gas explosion at the Sabon Tasha area of Kaduna Metropolis on Saturday.

The professor was identified by a green Toyota Highlander car he went to a barber’s shop with to have a hair cut near the scene of the explosion.

He is believed to be among those trapped in the barber’s shop as the building collapsed. The building housing the gas shop was completely razed in an ensuing inferno.

The professor is said to have hailed from Mallagum, Kagoro. A statement from the community confirming his death by Francis Donatus Gwaza read:

“We the Kagoro community regret to announce the death of one of our prominent sons of the land on his way back from the New Year celebration.

“Prof. Simon P. Mallam’s life was lost at [the scene of a] recent gas explosion that took place in Ungwan/Boro of Sabon-Tasha Comminity of Chikun Local Government area in Southern Kaduna. “Before his death, he was a professor of Physics with the Ahmadu Bello University Zaria, and the present chairman of Nigeria Atomic Energy Commission.

“May his Soul Rest in Peace and may God Almighty Comfort his entire Family. Amen.” Another friend of the Mallam family Eli Dangana said his remains were deposited at the Sabon Tasha General Hospital. The premises of major hospitals in Kaduna were besieged by families and friends of people believed to be near the scene of the gas explosion yesterday. The explosion occurred at about 2: 00 PM on Saturday at the gas shop opposite Total Filling station, Sabon Tasha as the attendants were refilling a cylinder for one of their customers. Immediately the explosion occurred, the entire Sabon Tasha and surrounding quarters were thrown into confusion as people ran in all directions out of fear. As news of the explosion spread, people who have family members and friends working around the premises scene began frantic search for their loved ones. People thronged the General Hospital Sabon Tasha, St. Gerald Hospital and the Barau Dikko Hospital where the victims were taken. In addition to the professor, the casualties our correspondent learnt, included customers who had gone to purchase gas, attendants and customers in nearby shops as well as passersby. An eye witness who gave his name as Philip Kambai said he was at a barber’s shop close to the gas shop for a hair cut alongside three other people when the explosion occurred.

He said: “They just finished barbing me and I was going out then I heard boom! I fell down, but I managed to get up. Then I saw fire, so I went behind and climbed a fence and in the process I sustained injuries. “One person also climbed the fence, but I doubt if the barber and two others came out,” he said. Another eye witness who identified himself simply as Bulus said he was passing by on a commercial tricycle when the gas exploded. “I was inside a Keke Napep when the gas exploded, though I sustained injuries, I am grateful that I survived it,” he said.

Several pieces of what appeared to be human flesh were scattered near the scene of the blast. The police were seen picking some of the pieces after they arrived the scene. Firefighters and other security agents arrived the scene and helped in putting out the fire. But the panic caused by the blast led to serious traffic gridlock on Kachia road, causing people to seek other routes to get to their destinations while security men took over the control of traffic.