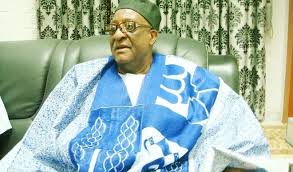 Chairman, Board of Trustees of the Peoples Democratic Party, Senator Walid Jibrin, has said his life is under threat of attack following his recent comments that every interested member of the party was free to aspire for the 2023 Presidency.

According to him, his life is being threatened for not saying that the 2023 Presidency be zoned to the North-East.

The BoT chairman said since he granted an interview over the Presidency, he had received anonymous calls threatening his life.

Jibrin had recently hinted that the party would soon commence a high-level consultation and search for credible candidate to fly the party’s flag for the 2023 Presidency.

He had also said every interested and eligible member of the party from any part of Nigeria, including the party’s candidate in the last election, Atiku Abubakar, were free to aspire under the platform of the party.

“Atiku is a Nigerian. Has he really failed in that (2019) election? The case went from the tribunal to the Appeal Court and up to the Supreme Court. If Atiku wants, he has the right to do so and other people have the rights to do so. Do you think it’s only Atiku that wants to contest?” he had asked.

Jibrin, while addressing newsmen on Thursday in Kaduna, said the matter never went down well with some people.

He said he had received threat calls of an imminent attack on him “for not saying that the PDP” should zoned the 2023 Presidency to the North-East geopolitical zone of the country.

The BoT chairman said, “I have received anonymous calls from some people threatening my life for not saying that the party’s presidential candidate should come from the North-East geopolitical zone of the country.

“They said I ought to have said that Atiku Abubakar should be the automatic candidate of the party in 2023.”

Walid argued that whoever wanted to contest was free to do so without necessarily threatening his life.

He added that some faceless people had even gone to the PDP National Secretariat at Wadata Plaza, saying that those that went there had the intention to deal with him.

While saying he remained unperturbed to threat from faceless people, Walid noted that he received similar threats during the ex-President Goodluck Jonathan’s administration because he was considered to be too frank about party matters.

He said he had since petitioned the Inspector- General of Police, Adamu Mohammed, over the development.

Jibrin, a Second Republic senator, added that he hoped the IG would swing into action to unmask those behind the threats and apprehend them.