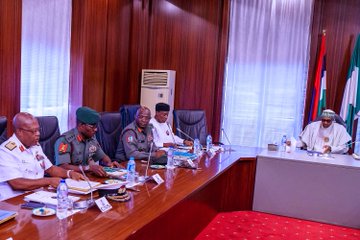 The military will begin to withdraw its forces from areas in the country where the desired objectives have been achieved starting from the first quarter of next year to enable them focus attention on other emerging threats and areas of concern. Chief of Naval Staff, Rear Admiral Ibok Ekwe-Ibas, said this at the Presidential Villa, Abuja, after a Security Council Meeting with President Muhammadu Buhari.

Ibok Ekwe-Ibas, who briefed and fielded questions from State House Correspondents after the meeting, said the Nigerian Police Force together with the Nigeria Security and Civil Defence Corps (NSCDC) would be preparing to take back those responsibilities as the military drew back its forces from those areas after the conduct of security threats assessment.

He said the position reached at the meeting was that the assessment was necessary to ascertain whether the Nigerian police and the civil defense were capable of manning those areas.

He said: “Basically, most of the internal security that we are having as you all are aware is supposed to be the responsibility of the civil authority, the police in particular. Howbeit, so long as Nigeria is not engaged in war outside, it means whatever internal crisis that we have, the responsibility rest with the police.

“In the circumstances that the military has to come in to stabilize the situation, it is only proper that once one area has been dominated by the military and the situation has returned to normal that the Nigerian police takes over the responsibility. And in this instance, we also have the civil defence which is supposed to support the police in this regard.

“You will recall also that Mr President recently approved the recruitment of about 10,000 Nigerians into the Nigeria Police Force, hoping that once these Nigerians get the appropriate training, they will be in the position to fill the gaps. “You are aware that Nigeria is such a big country that we cannot tie down the military even in those areas that the deliverables have been achieved and the objectives achieved,” he said when asked to mention the areas where the military would be withdrawing from and the specific instructions they received from Mr President.

The meeting was attended by the Chief of Defence Staff, General Gabriel Olonisakin; Chief of Air Staff, Air Marshall Abubakar Sadique; Chief of Defense Intelligence, AVM Mohammed Usman; and the Director General of Department for State Service (DSS), Yusuf Magaji Bichi. Others at the meeting were the National Security Adviser (NSA), Babagana Monguno; the Secretary to the Government of the Federation (SGF), Boss Mustapha; and the Nigerian Army Chief of Policy and Plans; Lieutenant General Lasisi Adeosun, who represented Chief of Army Staff, Lt. Gen. Tukur Buratai.