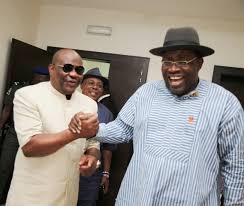 Governor Wike made the claim while reacting to the allegation made by Dickson that he (Wike) was responsible for PDP’s defeat in the state in a press briefing in Port Harcourt on Monday.

He said that the actions of governor Dickson preparatory to the election added to the defeat of the party.

Wike accused the governor of intimidating some of the candidates that wanted to contest for Senate and House of Representatives by asking them to withdraw from the race.

He also accused the governor of sponsoring somebody from his senatorial district for the deputy governorship position in the state, saying that all added to the defeat of the party’s candidate.

Wike claimed that he single handedly provided transport and logistics support to all the PDP governors that visited Bayelsa before and during the governorship election, alleging that the governor did not boarder to take care of his visitors.

“You forced two senators to withdraw from the election. You took the deputy governor candidate from your senatorial district, what do you expect the people to do. Do you think they will be happy with you. He worked for the downfall of the party,” he said.

The governor berated his Bayelsa State counterpart for his comments on the contentious Soku oil wells, which a Federal High Court recently ruled in favour of Rivers. “It is unfortunate. As a governor, there is a level you should not descend to. I will protect the interest of Rivers State. It is unfortunate. I read all his comments. I understand the level of frustration and you should not lay your frustration on us”, he said.