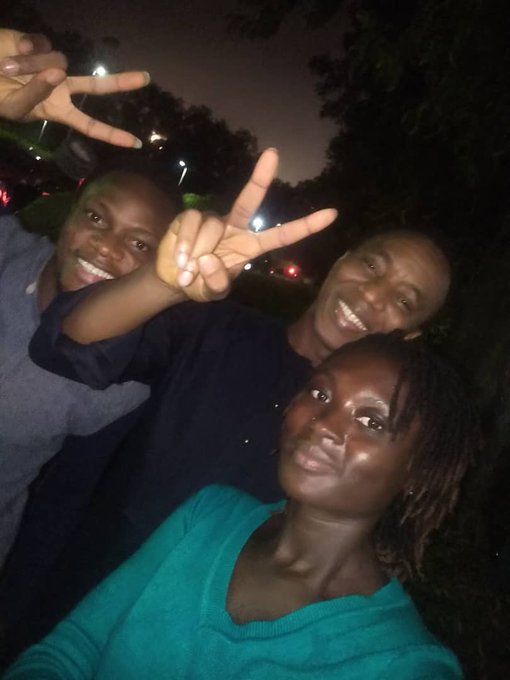 The department of state security services has finally released Mr Omoyele Sowore leader of the Revolution Now Protest few minutes ago in Abuja.

Mr Sowore first met his bail on November 6, one month ago, but he was not released. He was however, was arrested on August 3 for planning a series of protests.

Justice Ijeoma Ojukwu, who gave the order, also awarded a N100, 000 fine against the DSS over its delay to serve the defence counsel with the additional proof of evidence in the ongoing trial of Sowore and Olawale Bakare.

The judge, who was visibly angry over the development which has caused the court to adjourn the trial at the instance of the DSS, said the fine must be paid to the defendants before the next adjourned date, which is tomorrow.

A group of women on Thursday protested in front of the Federal High Court in Abuja to demand the immediate release of Omoyele Sowore and Olawale Bakare.

To drive home their demand, the elderly women removed their blouses, revealing only their bras.

According to the women, Sowore their son, had not committed any crime therefore President Muhammadu Buhari should order his immediate and unconditional release from the detention of Department of State Services.

Meanwhile, the Department of State Services (DSS), on Thursday, said it did not violate the court order on the release of Omoyele Sowore, Convener, #RevolutionNow Protest, and his co-defendant, Olawale Bakare.

Counsel to the DSS, Hassan Liman, SAN, made the remark in an interview with newsmen shortly after the Federal High Court sitting in the ongoing trial in Abuja.

Sowore, alongside Bakare, is being charged by the DSS with treasonable felony, money laundering, among others.

NAN recalls that Justice Ijeoma Ojukwu had, on Nov. 6, signed the release warrant of the defendants and ordered the DSS to make available all the necessary documents that would help to facilitate in the defence of the duo’s trial.

But on Thursday, Justice Ojukwu had condemned the security outfit’s attitude to court order, directing it to release Sowore and Bakare within 24 hours.

The judge then adjourned till Dec. 6 for trial continuation.

“I want to say once again that the DSS has not at any time refused or failed to comply with the court order.

“What we have done today is to go a step further to say that the DSS no longer want Mr. Sowore in their custody.

“That is what we are saying,” he said.

Liman explained that “when somebody is granted bail, he is expected to be released to the main person that has served as his surety.”

According to him, nobody, I repeat, has gone to the DSS to take Mr. Sowore and co. on bail.

“The court has made an order to release them forthwith.

“But the DSS has not refused, at anytime, to comply with court order

“And that is why the DSS filed an application today that they no longer want them in their custody,” he added.

Liman, however, assured that Sowore and Bakare would be released based on the order of the case and as soon as they meet the terms of bail condition.

“When you come tomorrow, you will know if that has been complied with or not,” he told the journalists.

Just In: Trouble as DSS In Court to rearrest Omoyele Sowore