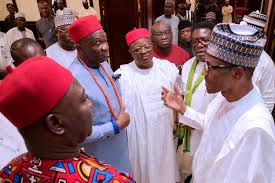 Gov. David Umahi of Ebonyi has declared support to the Federal Government’s closure of the nation’s borders, commending President Muhammadu Buhari for his courage in taking the action.

Umahi made the declaration on Monday at Onueke, Headquarters of Ezza South Local Government Area (LGA) while declaring open the Central Bank of Nigeria (CBN) Account Opening Week (AOW), adding that the nation would gain tremendously from the closure.

Umahi urged Nigerians to weigh the option of consuming poison from foreign produced-rice and ‘killers’ crossing the borders into the country in the name Economic Community of West African States (ECOWAS) treaty.

“We should consider the benefits of protecting lives and quote me anywhere, I support the president on the issue of border closure.

“The closure of border means that the illegal smuggling of petroleum products is minimised and so many other benefits,” he said.

The governor queried the pressure from other countries for Nigeria to open the borders, noting that they should not be more ‘Catholic than the Pope’.

“When China closed its economy against the world, it sat and provided a pathway for its survival, bearing in mind, its population.

“When it eventually opened its economy to the world, one can see that it is a super power and so our nation should not be a dumping ground.

“I believe the CBN supports the border closure because it has helped to ‘shore’ up the value of the Naira,” he said.

Umahi said the campaign for the opening of accounts would be intensified in the state during the period, as political officers holders, especially the new appointed ones will be expected to open accounts if they have not.

“The People Democratic Party (PDP) chairman should stop paying party executives by cash and when one includes the market women of over 10, 000 who are expected to open accounts, we will have about 15, 000.

“We will support each rural farmer who have not opened account from the 64 LGA development centres with N1, 000 to open accounts.

“The CBN must therefore, lobby the development centre coordinators to ensure that the beneficiaries do not have to come to Abakaliki to do this,” he said.

Mr Chris Adayi, CBN Abakaliki Branch Controller, said that the event which starts from Dec. 2 to Dec. 7, was going on across five other states of the country namely: Bayelsa, Ondo, Kano, Nasarawa and Gombe.

“The AOW is an initiative of the Bankers Committee, Financial Service Providers and all financial inclusion stakeholders in the state.

“The activity is part of the initiatives aimed at driving collective action and achieving the intended targets, while targeting the grassroots,” he said.

Adayi said that during the event, deposit money banks, micro finance banks, pension, insurance and capital market operators would mobilise to open accounts for the citizens

The Defeat that gave APC an entry into the South South

As The APC Loses Relevance In Lagos, Lagosians Need New Reasons To Vote