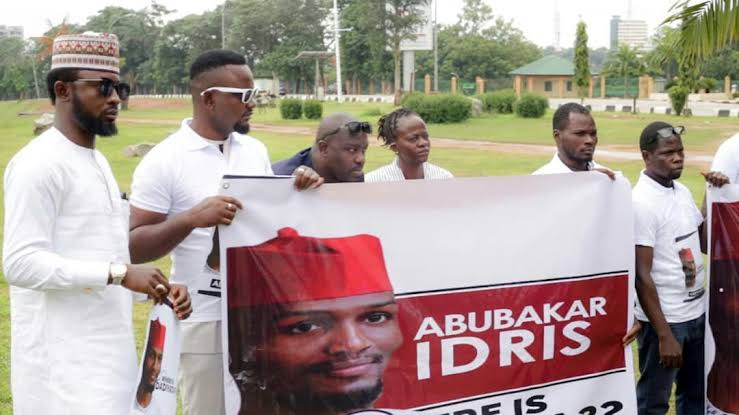 “I signed the Freedom of Information Bill to law, to expand the frontiers of our fundamental freedom. Let me reaffirm that under my Presidency, your views, no matter how freely expressed, won’t send you to prison or exile.” Goodluck Ebele Jonathan

Abubakar Idris, popularly known as Dadiyata is a fierce critic of the Buhari/APC administration. He is a strong voice to be reckoned with, on and off the social media. He also commands deep respect among the young Kwankwasiyya movement, which he is also a strong part of. A soft spoken unassuming young man with a great sense of humor. Dadiyata is married with kids. On the 2nd of August 2019, about 70 days ago, this brilliant mind with a very prospective future was abducted in his Kaduna home at Barnawa while attempting to gain access into his house.

It is quite imperative that I give the above brief about this young man so that Nigerians can fully understand the intrigues at play about his sudden disappearance. The uneasy quietness of state actors is very suspect.

While I won’t whip conspiracies here, many of which are already in the public domain. Still, I shall hold relevant institutions to account. Unarguably, it is their constitutional responsibility to ensure the security of ALL Nigerians, regardless of political affiliations. For me, any government that cannot guarantee the full safety of her citizens has failed woefully.

The trauma a wife experiences for not knowing the whereabouts of her husband is very grievous. The uneasiness in the heart of children not seeing their loving father like they usually do is pretty much disheartening. The excruciating pain of a parent not having a single clue about the situation of their “missing” son is obviously disturbing. I watched with an ached heart a BBC Hausa interview of his family members; Honestly, mere words cannot properly elucidate what that family is currently going through. Sad.

How can a citizen go “missing” for about 70 days without the relevant authorities having a clue or a pointer as to what happened? Are they culpable in this? Allegedly, it was said that Dadiyata was in the custody of the Department of State Security, DSS and was later handed over to the Nigerian police. “Common-sensically”, if one is known for exhibiting particular modus operandi, actions would easily be ascribed to it as it is easily the trademark of the current administration; picking up opposing voices and subjecting them to unethical acts. Here, Deji Adeyanju, Steven Kefason, Austin, Jones Abiri, Agba Jalingo, Segun Onibiyo, Adara 9, Luka Binniyat, Dr. John Danfulani and many more comes to mind.

The Nigerian state is one governed by the rule of law. People should not mysteriously disappear and held incommunicado for promulgating contrary views or for criticising leadership. Such acts against Citizens is preposterous, it stands condemned.

This is a clarion call on the Federal Government, Kaduna State Government and relevant security agencies to either have him released unconditionally or charge him to a law court with competent jurisdiction as constitutionally enshrined or fish out the perpetrators of this shamefully disgusting act! His wife needs him! The Children miss their father! His parents and siblings want him back!

Certainly, if Dadiyata’s sudden disappearance has any connection to the usual kidnappings for money, which has gradually become a norm in the Nigerian state, his abductors would have by now established contact with his family. Since for them, it is purely transactional. So, if they don’t have him, this means… Well, any recondite can easily provide an answer to that.

Steven Kefas is still in detention. In Kaduna State. He has spent over 160 days without being arraigned before a Judge to be tried. His offense? He was criticising Gov. Nasir El-Rufai. This dangerous precedence of gross violation of fundamental human rights and senseless abuse of power may come back to hunt those perpetrating and supporting them, tomorrow.

Oyewole Michael, a public analyst and political commentator can be reached via oyewolemichael9@gmail.com. He tweets via @Rolex7Michael

Olu Onemola: The Nigerian Presidency and the Unprepared Presidents