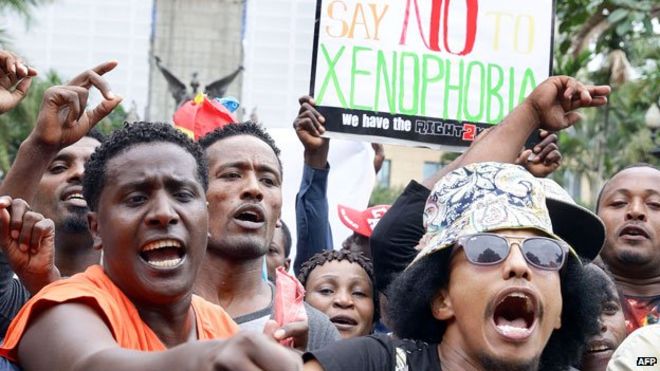 The Nigerian Government debunks reports circulated on social media of a bomb explosion at the South African High Commission in Abuja, on Saturday.

In a statement issued in Abuja, the Minister of Information and Culture, Lai Mohammed, said the report “is fake news orchestrated by desperate opposition to cause panic and chaos among the populace”.

The statement was signed by Segun Adeyemi, the Special Adviser to the minister. Mr Mohammed said the video of the purported bomb explosion was that of a bomb explosion at Emab Plaza, near Banex, Abuja, which occurred on June 25, 2014.

The minister said it was apparent that the desperate opposition had decided to use fake news and disinformation as handy tools in their avowed determination to make Nigeria ungovernable, having lost woefully at the polls.

“A pattern is emerging of the antics of the desperate opposition to latch on to the use of fake news and disinformation as a strategy to trigger chaos in the country.

“On Friday Sept. 6, 2019, they doctored and circulated the video of my appearance on Channels Television in January 2015 (when I was the spokesman of the APC) to make it look like I was begging Nigerians to forgive President Buhari for not having a school certificate.

“Worse still, they posted the video afresh, giving the impression it happened last Thursday and that I acted in my capacity as Minister of Information and Culture.

“One would have expected a party that trumpets its belief in the rule of law, a party that challenged the result of the last presidential election in court, to wait patiently for the impending judgment instead of engaging in underhand tactics and resorting to self-help,” he said.

The minister appealed to Nigerians to be very discerning at this time, and to check the veracity of any information they received.

“This is just the beginning. Nigerians should expect an explosion of fake news and disinformation in the days and weeks ahead,’’ he said.

The Minister warned those behind the orchestration of fake news and disinformation campaign to stop forthwith or be made to face the music.