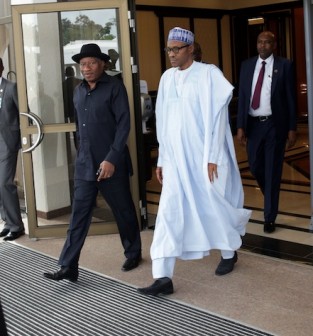 President Muhammadu Buhari says he will continue to respect his predecessor, Dr. Goodluck Jonathan, because of the way he conducted himself when the result of the 2015 election was being announced.

Buhari, who spoke at a dinner organized for members of Kannywood (Hausa-language movie industry) at the State House in Abuja on Thursday night, said by conceding defeat, Jonathan endeared himself to him.

Attributing his success at the poll to the use of the card reader and PVC, he said when others were contemplating what do with the result, Jonathan phoned to congratulate him.

“As they were thinking of what to do with the result which they were unable to manipulate because of the card reader and PVC, Jonathan phoned to congratulate me,” he said.

The president, who recalled how he was shocked when he received the phone call said, “I kept quiet for a while when he called me. He (Jonathan) then asked whether I didn’t hear him, I said I did and I thanked him.”

Recalling how he was rigged out in 2003, 2007 and 2011, he said he would continue to work for the country’s democracy. He said efforts were being made to end the Boko Haram insurgency.

The Secretary to the Government of the Federation, Boss Mustapha, said the president was seeking a second term because of the love he has for Nigeria and Nigerians.