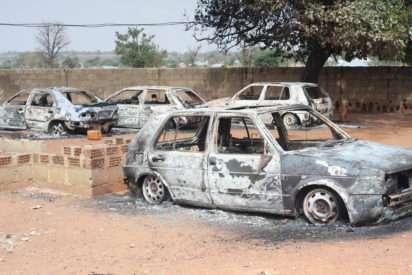 The Kaduna state police command says at least 55 people were killed in Thursday’s religious crisis in Kasuwan Magani in Kajuru local government area of the state.

The News Agency of Nigeria reports that Ahmad Abdur-Rahman, the state commissioner of police, disclosed this at a press briefing on Friday.

He said the police had arrested 22 suspects in connection with the mayhem.

Abdul-Rahaman said mobile and conventional policemen as well as a team of the state joint security operatives, Operation Yaki, dispatched to the town had restored normalcy in the area.

He said he had also visited the town and engaged youth leaders, traditional and religious leaders in the efforts to stop the crisis and prevent its spread.

Abdur-Rahman said the imposition of curfew by the Kaduna government helped to douse tension in the area.

The police chief vowed that all perpetrators of the mayhem would be brought to book.

“Anybody that has a hand in this crisis must face the full wrath of law, we will not allow lawlessness; we remain committed to saving lives and property of every citizens,” he said.

He appealed to the public to continue to live in peace and assist the command with useful information to track the perpetrators.

In February, a similar crisis in the area left 15 people dead.

A total of 65 people alleged to have been involved in the February crisis were arraigned in court but the case is still pending.