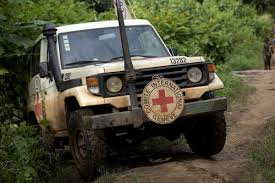 The International Committee of the Red Cross (ICRC) has appealed to the federal government to avert the killing of female health workers abducted by Boko Haram.

While the deceased worked with the International Committee of the Red Cross (ICRC), the survivors are staff of UNICEF.

Toafic Toure, ICRC operational communication delegate, Maiduguri sub-delegation, said the remaining workers could be killed as the 24-hour deadline given by their abductors ends Monday.

The insurgents claimed they had contacted the government over the captives but did not get any response.

They had also threatened to kill Leah Sharibu, the only Christian among the students of Government Girls Secondary School, Dapchi, Yobe state, abducted in February.

The ICRC called on the federal government to save the lives of the captives.

“The International Committee of the Red Cross (ICRC) is making an urgent public appeal to the Nigerian Government and to communities and individuals with influence to work toward the release of two committed medical workers abducted in north-eastern Nigeria earlier this year,” the statement read.

“To the holder of these kidnapped women, ISWAP (Islamic State’s West African province group): We urge you for mercy. We urge you to not kill another innocent health care worker who was doing nothing but helping the community in north-east Nigeria.

“A third health care worker abducted alongside Hauwa and Alice ICRC colleague Saifura Hussaini Ahmed Khorsa was killed by her abductors in September. The ICRC asks those involved with this case to do everything they can to avoid a repeat of that devastating outcome.

“Hauwa Mohammed Liman worked in a hospital supported by the International Committee of the Red Cross (ICRC) when she was abducted on 01 March with Alice Loksha, a nurse who worked in a centre supported by UNICEF.”

President Muhammadu Buhari has pledged his commitment to rescuing all captives.