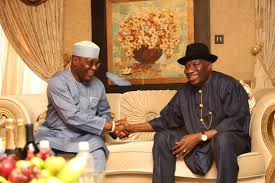 Former President Goodluck Jonathan has pleaded with south-east leaders to accept the decision of Atiku Abubakar to choose Peter Obi as his running mate for the 2019 election.

The VP pick of the Peoples Democratic Party (PDP) presidential candidate has elicited a protest from south-east leaders who say they were not consulted.

PDP governors and leaders of the region met on Saturday, reaching a resolution to meet with Atiku over the matter.

Reacting to the development on Sunday, Jonathan said a presidential candidate has a right to pick a running mate of his/her choice.

He said Atiku’s decision does not require “regional review and approval”.

A statement signed by Ikechukwu Eze, Jonathan’s media aide, read: “The task before us is to build on this firm foundation and momentum by pulling in one direction and working assiduously for the victory of these candidates at the polls.

“It is against this backdrop that I appeal for calm and understanding in the South East where my attention has been drawn to the fact that some leaders of our party are openly expressing their discomfort with the reported nomination of former Governor of Anambra State Peter Obi as Atiku’s running mate. I am told that some of our leaders in the zone have raised issues with the process of consultation that produced the Vice Presidential candidate.

“My plea is for Alhaji Atiku Abubakar to be given a free hand to choose who he wants to work with as his Vice President without putting him through undue pressure. In this regard, only minimal consultation is required which doesn’t necessarily have to involve full regional review and approval.

“We have to be careful not to give the impression that the process of selecting a Vice Presidential candidate cannot progress until a regional stamp of approval is formally procured. The system we are used to right from the First Republic is one that places the choice of a running mate at the behest of the candidate, based on his own convictions on capacity and compatibility.

“From my political history beginning from Deputy Governor to President, I can say that this is the tradition and standard practice in countries where either the President and his Vice or Governor and his deputy contest election on a common slate. In such instance, once a candidate emerges, he or she is given a free hand to select the person who understands his vision and plans for the country, as his running mate.

“I therefore want to directly appeal to my brothers and sisters from the South East zone who are members of our party to reconsider their position and allow the presidential candidate of our party to select a candidate he thinks he can work with to be able to achieve the party’s development goals. Since Atiku has nominated Mr. Peter Obi as his running mate, I am pleading with my party members from the zone to accept his choice.”